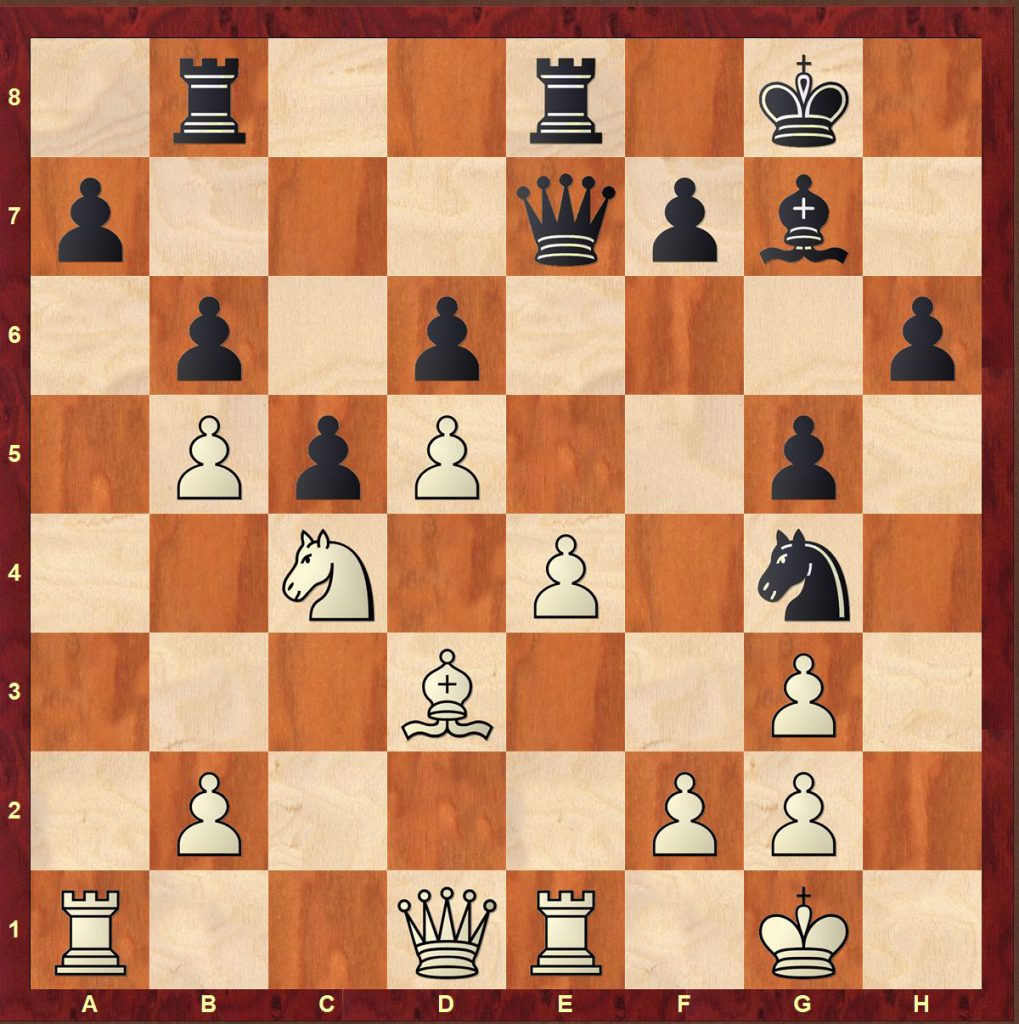 I’ve been enjoying reading through Tibor Karolyi’s 3-volume Best Games Collection of Mikhail Tal and especially the 3rd volume dealing with Tal’s later games (1972-1992). I love those later games: Tal’s style is a wonderful blend of the swashbuckling attacking with which he stormed the pinnacle of the chess world with some smooth positional play and great endgame technique. In this week’s blog, we take a look at his game against the Italian IM Stefano Tatai from Las Palmas 1975. A playable version of this game is available at http://cloudserver.chessbase.com/MTIyMTYx/replay.html

represents White’s initial opening goal. This requires some explanation! Black’s main counterplay in the Benoni is directed against the White centre, and in particular the pawn on e4 which Black can attack easily with his rook along the half-open e-file. Black’s typical Benoni counterplay with …b5 is based on the premise that this play will overload one of the pieces defending e4 (typically a knight on c3) 1. Playing e3 instead of e4 avoids giving Black an early central target which should make counterplay with …b5 both less dangerous and more difficult to achieve. 2. Developing the dark-squared bishop outside the pawn chain with 7.Bg5 ensures that the bishop is not left passive on c1 after e2–e3. 3.Nd2 controls e4 (to prevent Black from using this square) and also removes Black’s option of netting the bishop pair with …h6, …g5 and …Nh5. Once White has completed his development, he will most likely execute one of 2 typical anti-Benoni plans:a. Lining up against the d6 pawn by bringing the dark-squared bishop to the h2–b8 diagonal and combining it with Nc4b. Advancing e3–e4 and then f2–f4 to activate White’s central pawn majority. This idea of playing first in a restrained fashion with e2–e3, developing and then only later expanding with the desired e3–e4 and f2–f4 reminds me strongly of the system I played for most of my professional career against the Benoni structures (usually transposing from a King’s Indian): 1.d4 Nf6 2.c4 g6 3.Nc3 Bg7 4.e4 d6 5.f3 0–0 6.Bg5 c5 7.d5 e6 8.Qd2 exd5 9.cxd5. In this case, White plays f3 to shore up the e4 pawn to inhibit counterplay with …b5. Once White has completed his development, he looks to advance f3–f4! The thing that put me off playing this as White is the line that Tatai played: Black has a window of opportunity to win the bishop pair before White achieves his desired structure and Tatai – just like Tal did when he played the Black side – takes it!]

[It’s worth spending a little time evaluating this position as quite a lot has happened in 11 moves! In a short space of time, Black has established a fair amount of control on the dark squares: his dark-squared bishop rules the h8–a1 diagonal and his counterpart has been exchanged. White has been given doubled pawns on the kingside and without the dark-squared bishop, Black’s pawn weakness on d6 is harder to attack. The light squares are the downside of Black’s position. Winning the bishop pair with …h6 and …g5 has cost Black some control of the f5 square, which would be a very tempting square for a White knight. Moreover, playing e3 instead of e4 has given White the ability to attack this square with a bishop on d3 and a queen on c2. In general, I think that Black should be fine, but Tal himself got into trouble with Black against Furman so some care is required.]

[These moves look very natural for White, but they are actually quite subtle. Both against Botvinnik in 1960 and Germek in 1961, Tal had to face the early manoeuvre Nd2–c4 from White. In both cases, Tal reacted with …Nd7–e5, exchanging off the knight which has taken so much trouble to reach c4! In both cases, Tal had a comfortable game:

In this game, Tal follows Furman’s plan of leaving the knight on f3 and aiming at the f5 square instead. In that way, if Black does play …Ne5 to exchange knights, then White has at least not wasted time moving his knight on f3. Furman also had an excellent plan in mind which he implemented to perfection against Tal.]

[A natural developing move which had been played already by Vladimirov (although the position on the 23rd move in which a draw was agreed was pretty poor for Black!) but now the plan of exchanging knights with …Ne5 is much further away. I wonder whether Tatai was worried White might castle queenside if he castled kingside too early!]

and this is the key point, justifying White’s entire opening strategy. The pawn on e3 provides support to a White knight on d4 which then clamps down on the f5 square weakened by Black’s early …h6 and …g5. Tal struggles to free himself, but has absolutely no chance as White consolidates his grip. 21…Bd7 22.Bf5 Rbc8 23.Rc4 Kg8 24.g4 White manages to make use of an advantage of his doubled g-pawns: he can clamp down on the f5 square. 24…Qa5 25.Nce2

[Since …Ne5 is no longer on the table, Tal switches back to Botvinnik’s plan of Nd2–c4.]

[Black has developed his pieces to reasonable squares, but it isn’t too clear what he is intending from here on. I would be tempted to play …Ng4–e5 anyway, even though it has cost some extra time. Tatai’s slow plan doesn’t really hit the mark.]

[An interesting plan from Tal, hinting at e3–e4 but hedging his bets by keeping a rook on the a-file for queenside play.]

[As we mentioned earlier, the fact that White played e3 earlier does not mean that he will never play e4 when he is ready for it! Black’s pieces are clumsily-placed and ill-equipped to deal with the typical e4–e5 break.]

[20.e5 dxe5 21.d6 Qf8 22.Bf5 is mentioned by Karolyi and is also my engine’s strong preference. White has very strong compensation for the pawn as Nb5 and later a5 are coming. The text is also strong, though it gives Tatai time to re-establish some coordination by bringing the knight to g4.]

[A very good defensive move: Black’s position stands or falls by his knight on g4! First of all, the knight illustrates the weak side of White’s early opening strategy: the doubled g-pawns make it hard to drive the knight away from its advanced post while White’s limited protection of the dark-squares (due to White allowing the exchange of his dark-squared bishop) turn the knight into a concrete threat (…Bd4 is threatened). These weaknesses are particularly evident as White begins to emerge from his cautious opening shell (for example playing e3–e4). Secondly, the knight covers the e3 square and stops White from transferring his own knight to f5. Not surprisingly, Tal decides that this monster knight is worth a rook!]

[Giving back the exchange is one way to get rid of the powerful White knight, but now Black is fighting for a draw at most.]

[The decisive mistake according to Karolyi. Defending the b6 pawn with the rook was better:]

[A neat manoeuvre: the bishop goes to g4 and then White powers through with e5.]