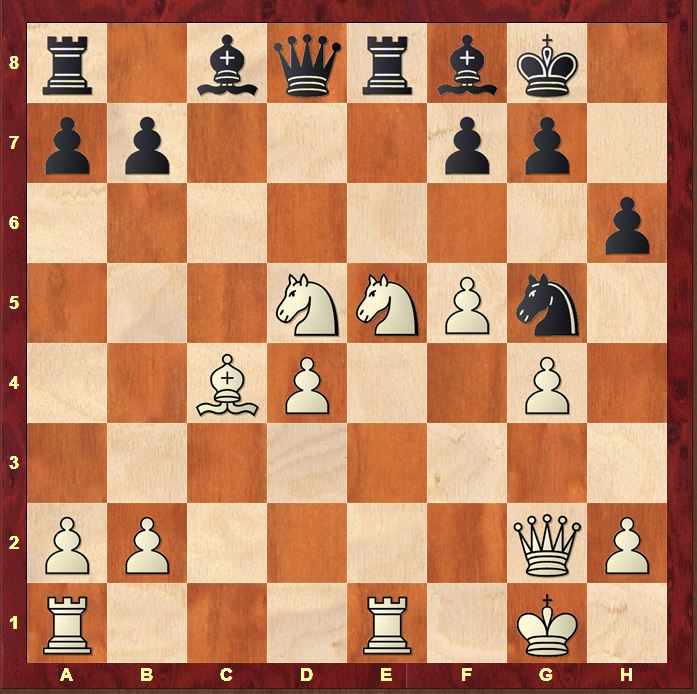 In the bar on the Saturday evening of the recent 4NCL weekend, I teamed up with my Chess for Life co-author WIM Natasha Regan against FM Jonathan Rogers and GM Matthew Turner for a no-holds-barred match of “hand and brain”. It’s a lovely chess variant for pairs in which one player is the “hand” and the other is the “brain”. The “brain” calls out a piece (for example, “knight”) and the “hand” has to decide which knight should move, and where. With hilarious consequences!

Modesty forbids to mention the score of our 3-game match, but one pair did emerge clearly victorious. This was due in no small part to the turnaround in the final game.

This scary position for Black was reached after White’s 22nd move. My brain and Natasha’s hand had not been in perfect harmony until now as calls of “Bishop”, “Pawn” and “Knight” had led to unexpected results. But as the desperate last-ditch tactics kicked in, we started to find the same wavelength…

“Knight” A slight misunderstanding there as I was actually looking for 24…Nh3+. After the text, we should be dead lost

27.Ne5 is mate in 13 according to Stockfish and even that looks a bit generous for Black’s position! Fortunately for us, the opposing hand and brain had a sudden attack of unecessary brilliance!

“King” Those are the moments the hand has to get things just right!