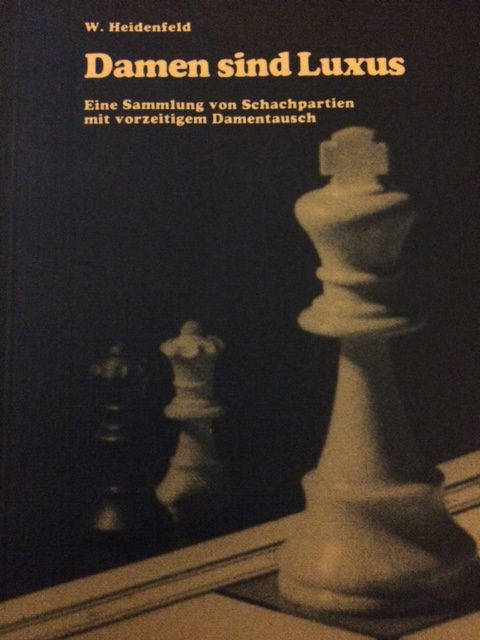 In the last few weeks, I’ve spent some time in the train analysing positions from a book “Damen sind Luxus” (“Queens are a luxury”) by W. Heidenfeld which my friend Steve Giddins leant to me over Christmas. I made a few little discoveries which I thought I’d share with you in this article. The games are available again in playable form at http://cloudserver.chessbase.com/MTIyMTYx/replay.html

In this position, 17.Bc4 led to a neat perpetual. 17.Be4 looked stronger to me as I couldn’t see how Black can unravel and Komodo concurs. However, the line that attracted me was Heidenfeld suggestion of 17.Rxg7+!

was recommended by Heidenfeld, and also gives White some advantage but I wanted something clearer;

was my first attempt, clearing f2 for a check from the White bishop on c5. I’ll show you my main line. It took me some time before I dared check it with the computer!

It all looks pretty terminal, but I found the following amazing defence:

Wow! White has no way to maintain his material advantage! This train line was confirmed by the engines – pleased about that!;

was my first idea, and is also very powerful

with Bxf6+ mate to follow. I liked that a lot when I saw it!;

After that wildness, something more sedate but no less intriguing:

“What a boring position” I thought when I came across the diagram in the book. And then a strange parallel struck me. In a previous blog article – http://matthewsadler.me.uk/chess-for-life/alekhines-themes-move-like-morphy/ – I talked about the secret of Morphy’s attacks, in particular their incredible velocity. My theory was that Morphy – just like Alekhine after him – started his attacks with an early move that created some awkwardness in his opponent’s position. Leading on from that, Morphy’s subsequent developing moves contained threats that the opponent had to parry with (non-developing) pawn moves. After a couple of moves like that, Morphy had built up such a lead in development that his attack was irresistible. Take a look at Morphy’s game against Count Isouard in that article to see a perfect illustration of this technique. Play in symmetrical positions is less extreme, but the same principles apply. The first player to move attempts to extract a “holding” move in reply to a developing move of his own and therefore hopes to gain an initiative through more rapid development. Let’s see how that works out in the game.

White is first to move and takes the chance to put pressure on e7. As Heidenfeld points out, Black cannot respond in kind with 15…Bg4 and has to respond to White’s threat with a solid defensive move. White therefore sees the glimmer of an initiative.

Black now played 16…h6 17.Be3 Bf5 and eventually lost, but I was curious what would have happened after 16…Bg4 (not mentioned by Heidenfeld) After all, if Bg5 could hurt Black, then …Bg4 should hurt White in this symmetrical position!

If White is forced to play this quiet protecting move, then you feel that the force of his initiative is dying down.

White manages to keep things going a little, as he is first to the c-file

My idea, which I thought contained a trap…

I thought that this was turning out well for Black, but Komodo stays calm

This was the move I really wanted to play: it feels as if White can keep the momentum he created with 15.Bg5 going by elegantly protecting his e-pawn while preparing to double on the open c-file. However, chess is a strange game! Sometimes, logical extra moves (such as Rc1–c2) just serve to give the opponent a better idea of where he should put his pieces! Black doesn’t need to just think of neutralising White’s control of the c-file: he can counterattack!

18…Rad8 is suddenly awkward for White! His bishop on g5 is trapped and his own light-squared bishop will get a square on d1 once the knight leaves d3.

Another idea I had, desperately trying to keep White’s momentum going

got me interested for a while, but Black can defend without too much difficulty. 20.Nd5 is met by 20…Rxe2

I thought Black had 2 possible ways of dealing with White’s threats, but my analysis was not up to standard I’m afraid 24…Rxe2

So indeed nothing much happening in the position, but I did like the thoughts I had about such symmetrical positions. It’s the first time in a while that I’ve really enjoyed analysing one, and that’s always the first step to playing them well!