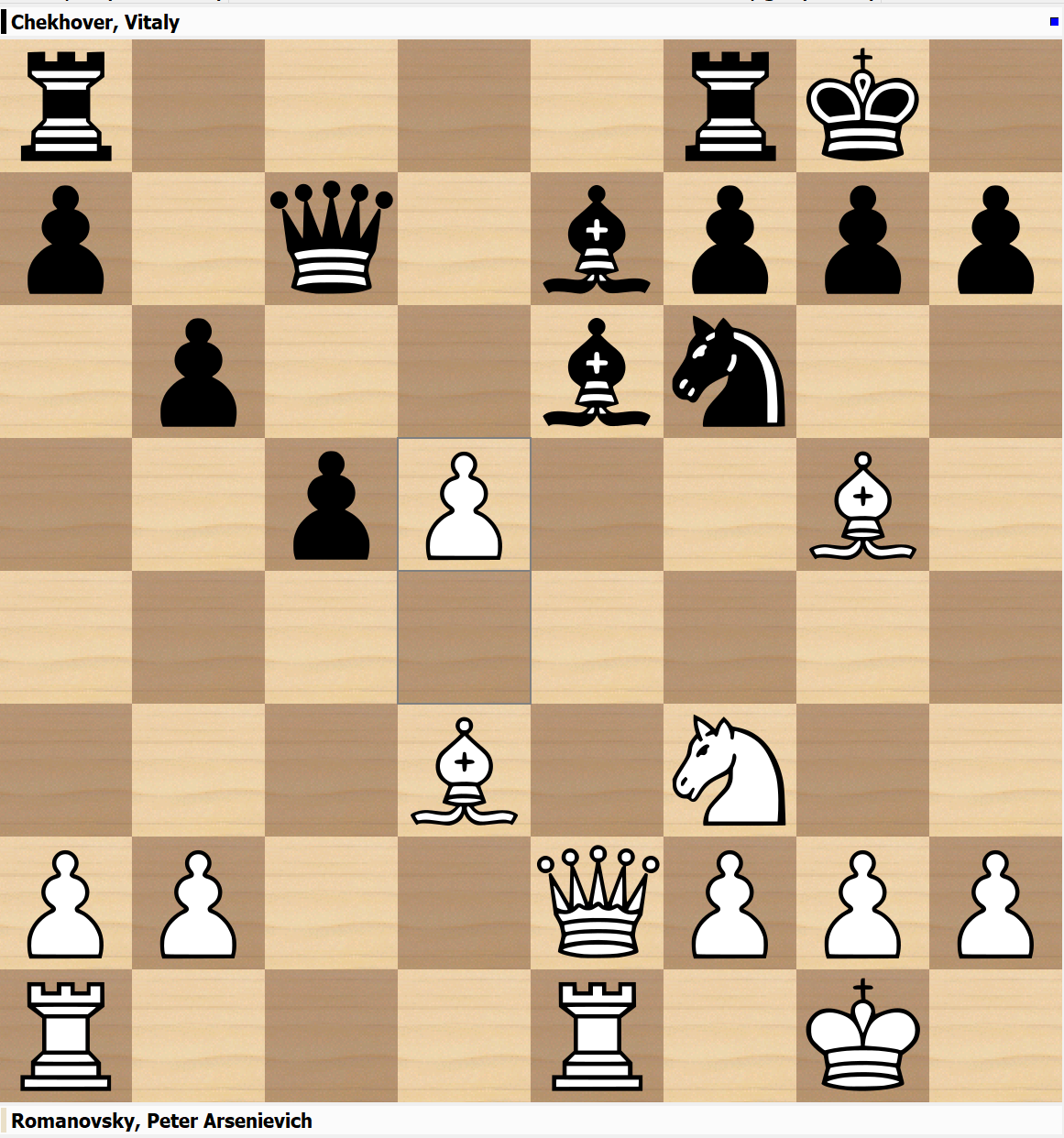 Idly flicking through one of the many Russian chess books I recently purchased from my friend Steve Giddins, my eye was caught by a diagram from a game by Peter Romanovsky. Peter Romanovsky was a strong Russian master and author especially active in the 1910s and 1920s. I had read his book “Soviet Middlegame Technique” (translated into English by Quality Chess) and liked it greatly: inevitably dated in some ways, but still full of valuable insights.

The diagram looked like the start of a thematic demonstration of dynamic attacking play: just the type of game I like! However, after a couple of hours’ analysis I realised that – despite some moments of exquisite play by Romanovsky – the situation had been much less clear-cut than I had assumed. And once I let my engines loose to check both the game and my analysis, well… let’s just say the game looked completely different!

The Torre Attack was not a frequent choice in Romanovsky’s repertoire – in any case from his database games.

An extremely direct attempt from Black to equalise immediately. Romanovsky reacts in kind and the game becomes very sharp!

White seems better-placed for such a tactical central explosion. All his minor pieces are developed to active squares and his rooks are ready to move to the central files. By contrast, Black’s knight on d7 blocks the queenside pieces (the bishop on c8 and thus also the rook on a8) and makes the bishop on e7 loose by blocking the protection of the queen on c7.

10…exd4 was an engine suggestion, cleverly exploiting the temporary threat of …c4 followed by …d3 hitting the White queen and bishop in quick succession. By eschewing …dxe4, Black avoids drawing the White knight on d2 to e4 and limits the activity gained by White’s pieces after 10.e4. 11.e5 (11.cxd4 h6 12.Bh4 Re8 was the engine idea, maintaining the central tension. This still looks promising for White, but requires more effort to generate activity than the game.) 11…c4 12.exf6 Nxf6

My engines also suggested trying to improve the moment of capturing on d3 with a move like 15.Qe3 followed by Bf4 but White remains with an advantage in any case.

After analysing the game continuation, I became dissatisfied with White’s chances and decided that 12.Rfe1 gave better prospects for a White advantage. As we shall see, that is not entirely correct, but it is a dangerous line for Black.

b) 12…Bd8 was another defensive idea of mine, but this leads to an obviously worse version of the game after the simple 13.cxd4 cxd4 14.Nxd4 with very active pieces for White.;

A Stockfish special, and a quite remarkable move! It’s one of those switches of tactical focus that Stockfish specialises in! As a human, you’re looking at the kingside all the time; Stockfish just spies an opportunity to win the c5–pawn!

and White is simply picking up the c5–pawn after either Bxf6 or Be3 on the next move! Genius!

When I saw this move adorned by a diagram in the book, I thought “Ah such a strong and typical break!” Actually, Black has multiple ways to deal with the resulting White initiative!

This felt a bit suspicious even while I was just reading quickly through the game. It doesn’t feel like the sort of move that White plays to develop a strong kingside initiative. In fact, after this move the engines think that Black is slightly better!

17.Qh4 Bxg5 18.Nxg5 Nf6 19.Nxe6 fxe6 20.Rxe6 Kg7 is White’s best line according to my engine with just a small advantage. It feels a little uncomfortable for Black to have an open second rank but it doesn’t seem to be enough for White to develop anything lasting.

An extremely artistic move… but the engine finds an even more artistic answer!

21…Qxe7 22.Qxe7 Bxd3 23.Re1 is an attritional defensive attempt but it won’t be easy for Black: the White queen is active and the Black queenside pawns are easy to attack.

I really like this passage of play from Romanovsky: the White pieces are centralised beautifully and the Black queen is prevented from activating itself on dark squares like d6, f6 and d4.

Another lovely move, preventing …Be6 while giving the White king a bolt hole.

A neat pin finish to a very interesting game!

4 Comments on “Romanovsky’s attacking gem… through the eyes of an engine!”