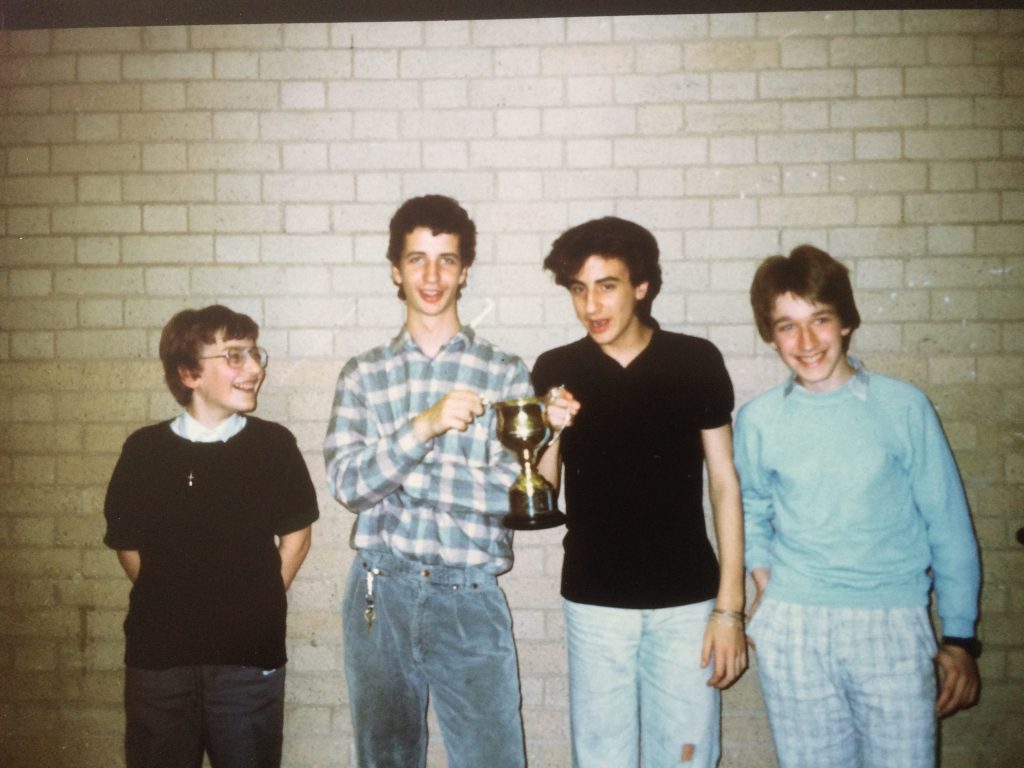 Whilst in England for Mother’s Day last weekend, I spent a couple of hours browsing through my old scorebooks again. A lot of memories there, some of which I thought might be interesting to share. As always, playable versions of these games are available at http://cloudserver.chessbase.com/MTIyMTYx/replay.html.

We’ll start off with the very first tournament game I ever played, one of the strongest junior events of the time: the North London Junior Under 8’s.

Amazing that the first opening you think up yourself without knowing any theory is the London System!

Both missing the win of a pawn with Bxc6

I’m sure I was very proud of this move, exploiting the pin of the pawn on d5!

Until here, Black has played rather better than me, but this just gives away an exchange

and I’d won my first ever tournament game. The next game however was the first of many tough lessons in life. I lost in 9 moves to Quentin(?) Rist – one of the best English juniors at the time – on the Black side of a Sicilian. And not for the first time, bitter tears were shed!

The first adult tournament of my career came a few months later at the Charlton Minor. It started inauspiciously with a little tactical lesson…

For some reason, I’d graduated from the London System to the Veresov in the 3 months since my last tournament!

Oops… and yet…. Bizarrely enough, the power of modern engines indicate that 5.Qd3 was in fact a very subtle trap!

However, I proceeded to beat my opponent rated BCF 107 (ELO 1500), picking up pawns on a regular basis until the moment he blundered his queen!

At some stage after this, I started working together with Steve Giddins and my opening repertory got a little stronger. With White I mostly played gambits such as the Morra (1.e4 c5 2.d4) and the Danish Gambit (1.e4 e5 2.d4 exd4 3.c3 dxc4 4.Bc4). With Black against 1.d4, Steve showed me the Von Hennig Schara Gambit which brought me this win.

This game was played in the London U–12 and was my first published game! I was aged 8 of the game, and I was incredibly proud of the game, as it was played against the top seed, rated BCF 144 (about 1900 ELO)

10…Qb6 would recover the gambit pawn immediately with the double attack on b2 and f2.

I had a weakness for moving the bishop to b4 in this line. Not sure why…

It’s not too impressive so far! Simply

21.Nxa5 Nxa5 22.Rcd1 would secure a spot for the dark -squared bishop. White starts to panic however.

I’m not exactly finishing accurately, but the moves are logical: Black is opening lines and inching his pieces closer to White’s exposed king

Once again however, there were tough lessons to be learnt in the very same tournament…

The following game from the same tournament is etched into my memory. After a promising start of 2/2, I lost 3 in a row including this game in which triumph and disaster succeeded each other at lightning speed!

Winning! Well not quite, Black has a most undeserved resource…

I’d missed this. To my horror, I saw that I wasn’t winning a piece: I was simply remaining a pawn down! My position is still very good of course, but it put me off so much, I played poorly and lost a long game!

A slightly older player I found very difficult to deal with was the super-fast moving tactical talent Demetrios Agnos who later became a GM representing Greece (unsimplifying his name in the process to Dimitri Anagnostopoulos… glad I never had to spell that on a scoresheet!) Here are a couple of examples:

That move again! 9…Bc5 is better if you’re planning to castle queenside!

Oops. Demetrios was always on the lookout for these sorts of incidental tactics.

The following game a few years later was also impressive!

Both players had 4/4 so this a crucial game for the top spot. I lost twice within a couple of months in this situation against Demetrios!

Demetrios had confused me by playing a Modern Benoni while leaving his king in the centre! I’d played quite well until here, but under approaching time pressure (Demetrios always played very fast) things started to go wrong…

36.Qd1 screams the engine with sneaky counterplay via a4 if Black doesn’t exchange queens!

36…Qxe4+ and I lost in the time scramble

I can still remember my bitter disappointment! He was too fast, too good!

14…gxf5 15.Rxf5 Nf6 was the move that annoyed me greatly at first when analysing at home, but 16.Re5 was my huge discovery. Komodo gives me just a slight disadvantage!

All preparation which isn’t bad for a 12–year old working at home on his own without an engine!

A blunder. 20…Qd7 was most sensible stopping the queen coming to h3 though White has serious play now

Rounding off this period just up to my 13th year, the following game also left a deep impression on me. I felt I’d played in a nice, controlled manner against an experienced 2300 opponent (I was still rated about 2100 at the time) and I was very happy with the endgame twist!

Played to keep the Black knight on g7 and pawn on f5 under wraps, but probably too cautious. 32.Qxa5 was better.

I still remember the thrill I got once I cottoned on to the idea I played in the game!

The engines don’t spot this beforehand, but move quickly to +4 once it’s played.

The pawns are unstoppable!

6 Comments on “A walk through memory lane”