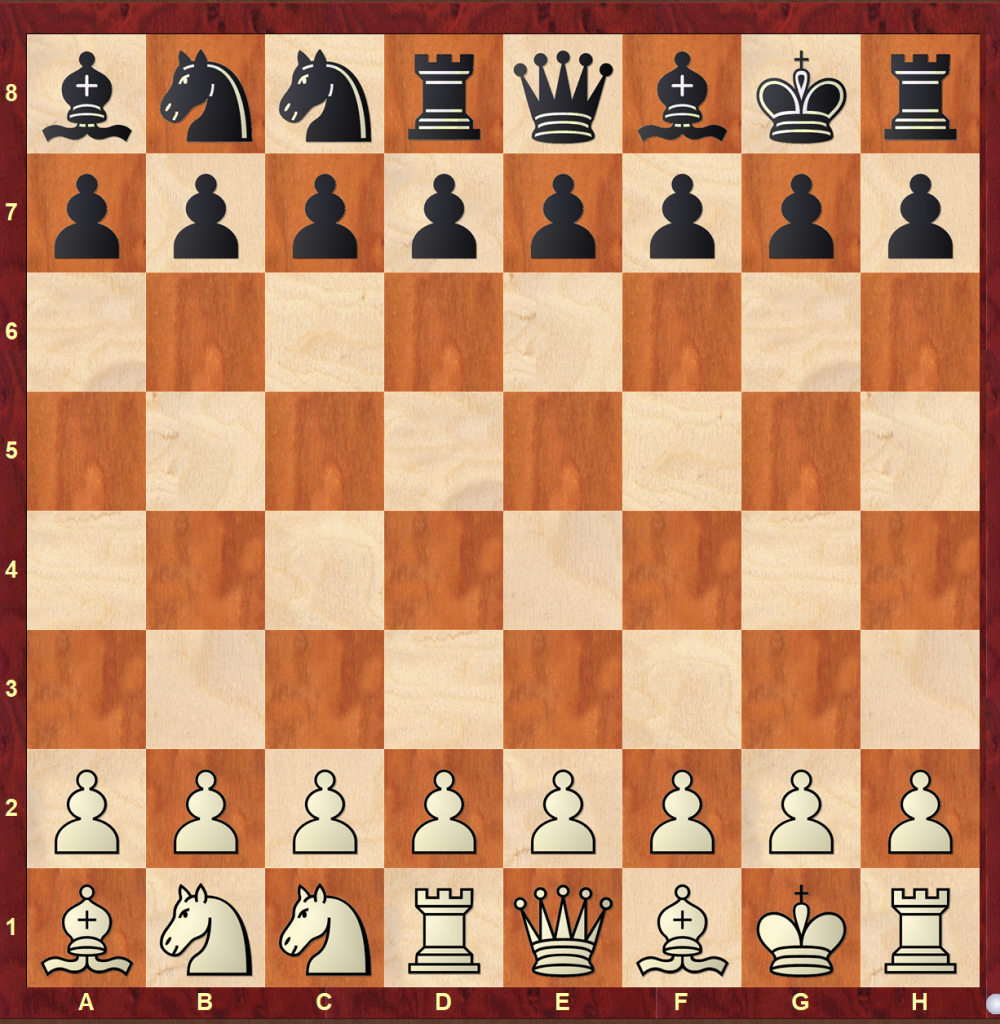 It’s Chess960 time at the TCEC! (https://tcec-chess.com) The more I watch these games, the more I feel that the gap between humans and engines is even higher in Chess960 than in normal chess. I loved the opening phase of this game between two of the less famous engines on show. I’m not sure I would have thought of any of Black’s moves!

In common with most players, I always take a few minutes to size up a Chess960 position before I start to make moves! A first sweep through the position seems to indicate good and natural development prospects for the White pieces.

Nb1 – The standard knight development with c4 and Nc3 is obvious

Nc1 – An odd place for the knight, but d3 is a good spot for the knight in a 1.d4 opening. So the moves d4 and Nd3 also seem indicated.

Qe1 – As always, the queen can fit in with virtually anything. Here it is well-placed to support the e4 push after d4 to set up a double pawn centre.

Bf1 – The bishop can – just as in normal chess – support a Queen’s Gambit type advance with c4.

Kg1, Rh1 – These are perfectly-placed to castle normally in one move once the bishop on f1 develops. However, since the king is already on the castling square g1, you might consider trying to achieve more with the rook than just moving it to f1. h4 and Rh3 comes to mind.

In conclusion, my first thought as White would be to play d4, c4, b3, Nc3, Nd3, e3(e4) with a natural d4–type opening. As we shall see, although Vajolet’s White moves are somewhere in the ballpark of what I have described, SlowChess’ Black moves are completely different!

My natural first move would have been 1.d4, but this is also perfectly reasonable.

We have a sort of English!

This is the start of some remarkable moves from SlowChess! Firstly, Black is alert tactically and keeps the knight on b8 ready to meet Nd5 (attacking c7) with …Na6 (followed by …c6 to chase away the knight from d5). Secondly, Black sets up some sort of future connection between the bishop on a8 and the h-pawn (which would converge on g2 after a subsequent …b6 and …h4–h3.) and perhaps even between the bishop on a8 and the rook on h8 after …Rh6–g6. After Black’s first move, White might even have considered a Botvinnik-style setup with g3, Bg2, e4, N1e2 and 0–0 (Rh1–f1) with either d3 or d4 to follow depending on circumstances. 2…h5 makes sure that Black can meet g3 with …h4!

2…Nc6 would be the natural follow-up in a standard English opening, clamping down on d4  but 3.Nb5 here is extremely awkward! 3.Nb5 Bd6 The only way to defend c7! 4.c5

4…Bxc5 5.Nxc7 Qe7 6.Nxa8 Black should recover the piece but will need some effort to do so without losing material in return. In the meantime, White has netted the bishop pair already.

3.h4 was also possible, preventing Black’s obvious play with …h4–h3 and asking Black to demonstrate any other points to its second move.

A huge contrast in approach! While White is placing all its pieces centrally, Black is playing around the sides! The knight covers c7 against Nd5 and avoids blocking the a8–h1 diagonal for the light-squared bishop on a8 after …b6.

Suddenly, Black’s seems to be in severe danger after just 7 moves. Nf6+ is a reply to many of Black’s most natural moves.

Another shocking move! This move – abandoning the possibility of blocking the a1–h8 diagonal with a pawn – is not one you would expect to parry threats along the long diagonal! However, the f5–pawn takes away g4 from the white rook (neutralising the tactical threat of Nf6+) and highlights the lack of squares available to the white rook on d4. White’s attacking knight on d5 is also not stable as it can be driven away by …c6 (a result of Black’s foresight in placing the knight on a6 on move 5!).

The more I analysed, the more it seemed that Black was doing OK in this position. A large part of me rebelled against this idea: how could Black still be fine after playing all these odd ideas in the first 7 moves (…h5–h4 and …Na6) from the starting position in the face of White’s beautiful central strategy? The crux of the matter lies in the words “starting position”. The starting position of a Chess960 game is not the same as that of a normal chess game!

Firstly, Black’s development was already pretty advanced from move 1! The black king was already “castled” on g8, safe from any central dangers! Even more interestingly, the king could still castle to the queenside if matters get too hot on the kingside!

Secondly, looking at the starting position of the black queen on e8, you see that it defends light squares (such as g6) that would normally be terribly weakened by the moves ….h5–h4 and …f5. The moves Black is playing are strange, but they do seem to fit the positions of the pieces in this specific Chess960 position.

7…Rh6 was what I was expecting to deal with the threat of Nf6+. However there are some unexpected tactical problems. 8.Qc1 Threatening Qxh6 followed by Nf6+ 8…Qe6 Black doesn’t want to play …Bxd5 to counter this threat as none of Black’s opening play (…h5–h4, …Na6) makes sense if the light-squared bishop is exchanged. However, Black’s queen and rook are unpleasantly exposed to White’s minor pieces after 9.N3f4.

Attacking the f5–pawn, opening the diagonal of the dark-squared bishop and getting the rook out of attacks such as …c6 followed by …c5.

This sharp central break looks extremely strong. Somewhere in the mix, the bishop on f1 is now eyeing the loose knight on a6 along the f1–a6 diagonal!

A great defence, hitting the knight on e5, giving White no respite to develop further with Be2.

12…Rxe5 13.Bxe5 Qxe5 14.Bxa6 looks a more natural way for Black to play. Why would Black spend a tempo to make White capture the knight on b4 rather than a6? You will see in a few moves… For a start however, the white queen is offside on b4 and no longer covers the white kingside dark squares.

Suuuuuper-long castling! The point of all Black’s previous play! Risks such as 7…f5 are acceptable if you know there is a safe spot for your king on the opposite flank away from the weaknesses you have created! You may only now (as I did!) realise the point of 12…Nb4: if Black had let White capture on a6 with the bishop after 12…Rxe5, then queenside castling would be impossible, prevented by a bishop on a6!

The rest of the game is still interesting but less relevant to our theme. Black has a pawn for the exchange, a weak d5–pawn as a target and plenty of play on the dark squares. The game is approximately balanced and ended in a draw on move 80.