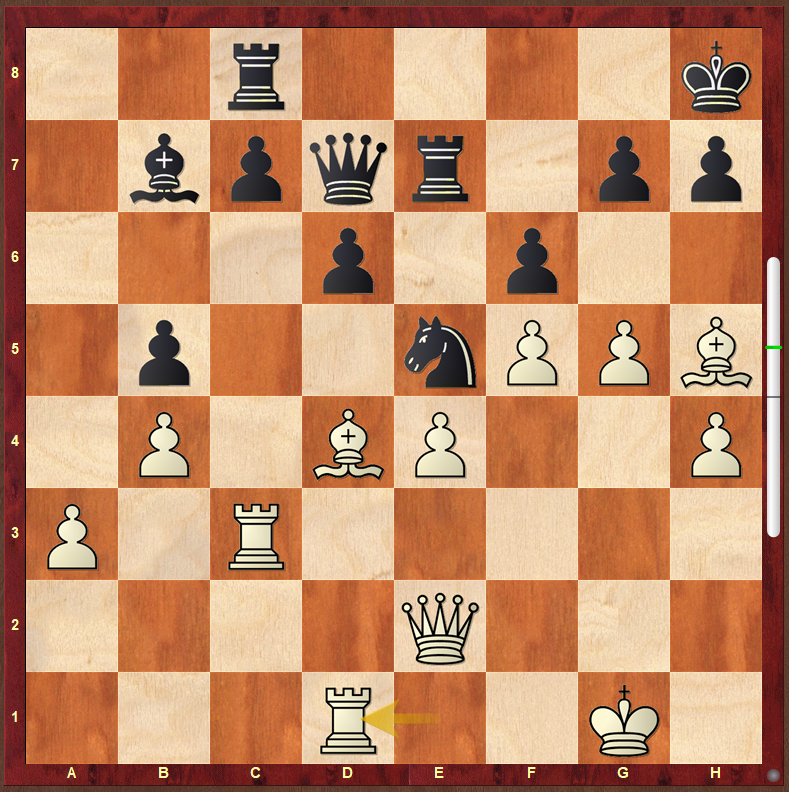 Watching engine chess nowadays is often a feast of amazement at the ideas they come up with, but from time to time something happens where you think: “I could have done better!” Such a surprising moment occurred in the massive Viewer Submitted Openings bonus event run by the TCEC in Season 21 in a game between Stockfish and Leela.

We join the game after White’s 36th move. Stockfish was at a confident 1.28 but Leela was at a fairly cool 0.35 which seemed slightly odd to me.

White has the 2 bishops, a massive kingside space advantage with the black king there as a target, and plenty of space to transfer major pieces to either wing. In principle, there is a tempting target on e4 which Black can attack with the light-squared bishop and all its major pieces, but it seems unlikely that the knight can safely leave e5 where it blocks the attack of the dark-squared bishop against the f6-pawn.

All in all, lots of plusses for White and not much counterplay for Black which makes me doubt Leela’s evaluation.

Leela was down to 0.32 now and Stockfish was…excited! The tactic that Leela missed was relatively simple – I’d expect to find the first moves myself in a rapid game, though I couldn’t rule out getting tricked in one of the sub-variations later 🙂

One of my revelations when I spent a few weeks analyzing attacks by Tal was that Tal basically took stuff and attacked stuff in his attacks. Which is to say that you shouldn’t be fixated on complicated ideas when attacking and also leave room in your combinative vision for simple, forcing continuations (an occasional blind spot of mine). Here White removes a defender of g6 with 37.Bxe5 and then attacks the h7–pawn with 38.Bg6 (threatening Qh5). Simple chess and indefensible! One key reason for this is that Leela’s last move 36…Rf8 blocked the escape route from the corner for Black’s king. Black must waste a tempo moving this rook again to free its king… and this is the tempo White needs!

With the threat of Qh5+ and Qh7+mate

Now White needs to catch the king before it escapes to d8 via f8–e7! Pressure against f6 is the key, and White has one clear best way to achieve this

Not the first rook that would occur to me: intuitively I would move the rook on d1 to the f-file, leaving the rook on c3 attacking c7 and (hopefully) tying down the black queen. We’ll see soon why keeping a rook on d1 is important.

Let’s have a look at a couple of the alternatives I tried to make work!

was my refinement of this idea, but Black has a lovely desperado riposte

Leela chose to run immediately with 41…Kf8. We will look how that turned out later. Let’s first look at some important lines:

allows White to demonstrate the key tactical point of bringing a rook to the f-file! 42.Qh7+ Kf8 43.Rxf6+

is the beautiful justification of White’s sacrifices)

is the most challenging defense looking to block the f-file with a white pawn to give the black king a chance to escape to the queenside. 42.Rxf5 Rxf5 43.exf5

Back to the game, Leela ran with 41…Kf8 but again got hit by the killer tactic 42.Rxf6+

Again, I’d be slightly nervous to win this as White in a quickplay finish, but Stockfish has no fear!