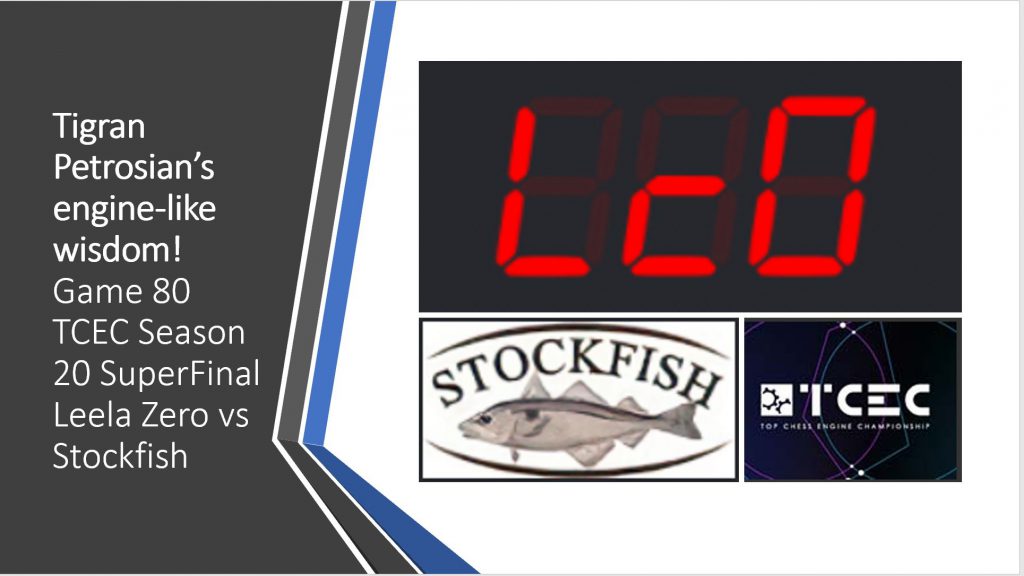 In his notes to his Black game against Mikhail Tal in the 1958 USSR Championship, later World Champion Tigran Petrosian made a profound observation that has always stayed in my mind.

“Experienced players know that, in a cramped position, the main trouble often happens to be the poorer activity of the rooks. E.g., White advances his kingside pawns supported by rooks on f1 and g2; the black rooks are limited to their first and second ranks, waiting until the game will be opened”

This is how he explained the fantastic defensive rook manoeuvre in the game: he was simply trying to reduce that inherent disadvantage of being a defender.

I thought of this while trying to make sense of game 80 of the TCEC SuperFinal between Leela Zero and Stockfish.

This position is taken from a crucial moment in the Season 20 SuperFinal between Leela Zero and Stockfish. Stockfish had taken a 3–point lead after 79 games with a convincing win on the White side of this “slow” French Winawer (1.e4 e6 2.d4 d5 3.Nc3 Bb4 4.e5 b6) and now it was Leela’s turn to try and make something of the White pieces.

In principle, Stockfish had done reasonably with Black, flattening out White’s dynamic advantage with exchanges and avoiding major weaknesses. However, White’s space advantage (the e5–pawn), better mobility (the white rooks can use the open 4th rank to move from kingside to queenside) and Black’s awkward king on g8 (blocking in Black’s rook on h8) add up to a stable White advantage. TCEC Leela’s assessed its advantage as 0.53 which for Leela (which always has conservative evaluations) is almost a clear advantage. This figure did not change for many subsequent moves. Stockfish’s evaluation was much more interesting, varying between 1.1 and 1.3. Stockfish’s evaluations in the opening phase are often over-optimistic in my view, but you should take note in the middlegame phase!

A far from obvious starting move, supporting Rh4 to drive away the black queen from the fourth rank.

The black queen maintains its contact with the d3–square in order to prevent Qd3+ after …Kh7. Black’s  first priority is to get its king off the first rank and activate its king’s rook on h8.

The first step has been accomplished; the next step will be to move the king’s rook and Black’s development will be normalised. However, there is a funny part to this. Black must activate its rook on h8 to stand any chance of defending its position: otherwise, Black is essentially a rook down. However, once the rook has moved from h8, you can argue that Black’s defence of its kingside has been weakened and that a White kingside pawn assault with g4–g5 stands a better chance of succeeding. We have seen many times after all, Stockfish turning a normal castled structure into this defensive structure with …Kh7, …Rh8 and …Kg8! In that way, once the g-file is opened, Black can defend g7 with …Rh7 and leave its king less exposed on g8; after …Kh7, Black must defend g7 with …Rg8, leaving its king somewhat in the open air on h7!

How should White proceed? From move 21, Leela developed a consistent view of the position, did not change its ideas or its basic evaluation and predicted the course of the game pretty accurately. However, while doing so, Stockfish’s evaluation of its chances improved considerably! From 1.11 on move 21 to 0.16 on move 35. It isn’t 100% obvious at first glance however what caused this. Let’s play first of all through Leela’s attempt and see how Stockfish defended.

Firstly, Leela plays the pawn to f4, ensuring that g5 …hxg5 can be met by fxg5.

Stockfish sets out its stall, claiming it can hold this setup for eternity!

Finally Leela moves to the next phase of its plan, setting up an advanced pawn on the opponent’s third rank (a favourite AlphaZero ploy too!) thus pinning the black king to the back rank.

And this is the defensive structure that Stockfish will resist with! Black’s rook on f8 prevents White from breaking with f4–f5 while keeping a white major piece tied to the defence of the f4–pawn, the Black queen can hit the g6–pawn from time to time to distract White from attacking plans on the queenside and Black’s queen will remain active ready to check the white king as White tries to make progress.

Black would probably be able to sit tight and hold, but Stockfish has a more active plan in mind.

Black uses its rook’s pawn to open up the White’s king position!

And now the other rook’s pawn – which became passed almost unnoticed after White played g6! – starts to roll! It’s a little risky as the black king becomes more exposed (I once lost a rapid game – 5 pawns up if I remember correctly – to English grandmaster Michael Adams by doing exactly this!) but it also gives White an extra headache in addition to its open king.

Essentially the game featured a standoff: Leela chose a strong, typical structure and Stockfish said: “I can hold this!” So, what’s the conclusion? Is this structure just nothing for White? Well firstly, I should make the caveat that Stockfish makes it look easy to sit and wait for however many moves without making a tactical mistake, but it’s a different matter for an over-the-board human game! This would be a difficult defensive task.

Stockfish’s evaluation went to just 0.32 after achieving that! “Now you see an advantage, now you don’t!” Magic!

“Puzzling over why 26…b5 moved SF’s eval from +1.1 to +0.3. Seemingly b5 changed nothing. The pawn structure didn’t change. So what did Fish see that it hadn’t seen before b5?! My only theory is now if there is ever f5 and ef, black queen on a6 is now an active defender???”

It’s intriguing as well that Stockfish’s preferred move 1 move earlier was not 25.Kb1 but 25.Rb4

preventing 25…b5 due to 26.Qd3+ forking king and b-pawn. Let’s dive a bit deeper and look at Stockfish’s main line after 25.Rb4

It doesn’t look that different does it? It’s kind of a spot the difference puzzle! The big difference is that all the rooks are on the board. As Petrosian said, the biggest problem in defending is often the passivity of the rooks. From that point of view, exchanging a pair of rooks – as Stockfish managed in the game against Leela – is a significant defensive achievement for Black!

So, does 26…b5 help Black to exchange rooks? Well, let’s see what happens if Black tries to do without it.

with a winning position for White.

26…b5 supports …Rc4 and enables Black to recapture on c4 with the b-pawn, avoiding the opening of the d-file! It also supports …Rc4 without needing to move the king from h7 so the g6-pawn keeps its protection, and the king stays on its optimal spot. The white queen can of course chase away the black king with Qd3+… but then the white queen is no longer on the c1-h6 diagonal and no longer attacking h6!

I’m certainly not claiming that White is winning after 25.Rb4, but it’s a beautiful prophylactic move, stopping a major Black defensive idea. As you can see from Stockfish’s main line, it costs Black a lot more time to organise the necessary …b5, which inevitably gives White extra chances.

Interestingly, in the engine games I ran on my weaker hardware and less cutting edge engine versions (not a perfect test in any way, but somewhat indicative), “mad hacker” neural net Stoofvlees II a16 went for 25.Rb4 and managed to defeat Stockfish!

Also, when I ran “my Leela” with the lovely Nibbler tool for about 23.7M nodes (this took a really very long time on the weak laptop graphics card I used for that test!), it switched its first choice at move 25 from 25.Kb1 to 25.Rb4.

That’s strange in a way since the reading on “TCEC Leela” on move 25 was 71.3M nodes: it had searched much more than “my Leela” and still went for a weaker move.

I’m somewhat out of my expertise level but I believe this may have been an artefact of how well Leela had predicted the moves that Stockfish would make! Already on move 21, Leela had predicted the game continuation up to move 28 (move 31 if you ignore a small transposition) When that happens – as far as I understand – Leela does not throw away its previous analysis but keeps all the relevant parts and then builds on that further.

By move 24, Leela had built up a node count of 58.2M nodes (that’s a big search tree!) Between move 24 (24.Rh4) and 25 (25.Kb1), Leela’s node count increased from 58.2M to 71.3M. This increase may not have been enough to promote the stronger idea 25.Rb4 to its main line (I’m absolutely convinced that Leela saw it and dedicated some time to it). Remember, Leela always plays the move it has analysed the most, which is not necessarily the best move it finds in the position!

If I’ve got that wrong, then happy to be corrected of course!

Anyway, getting back to the chess, it seems that Stockfish assessed the general contours of the position better than Leela, understanding Black’s need to exchange rooks to reduce its dynamic disadvantage in a way that would have made Petrosian very proud!. Even after that it was still a difficult defence of course, but difficult defence is something Stockfish does very easily!