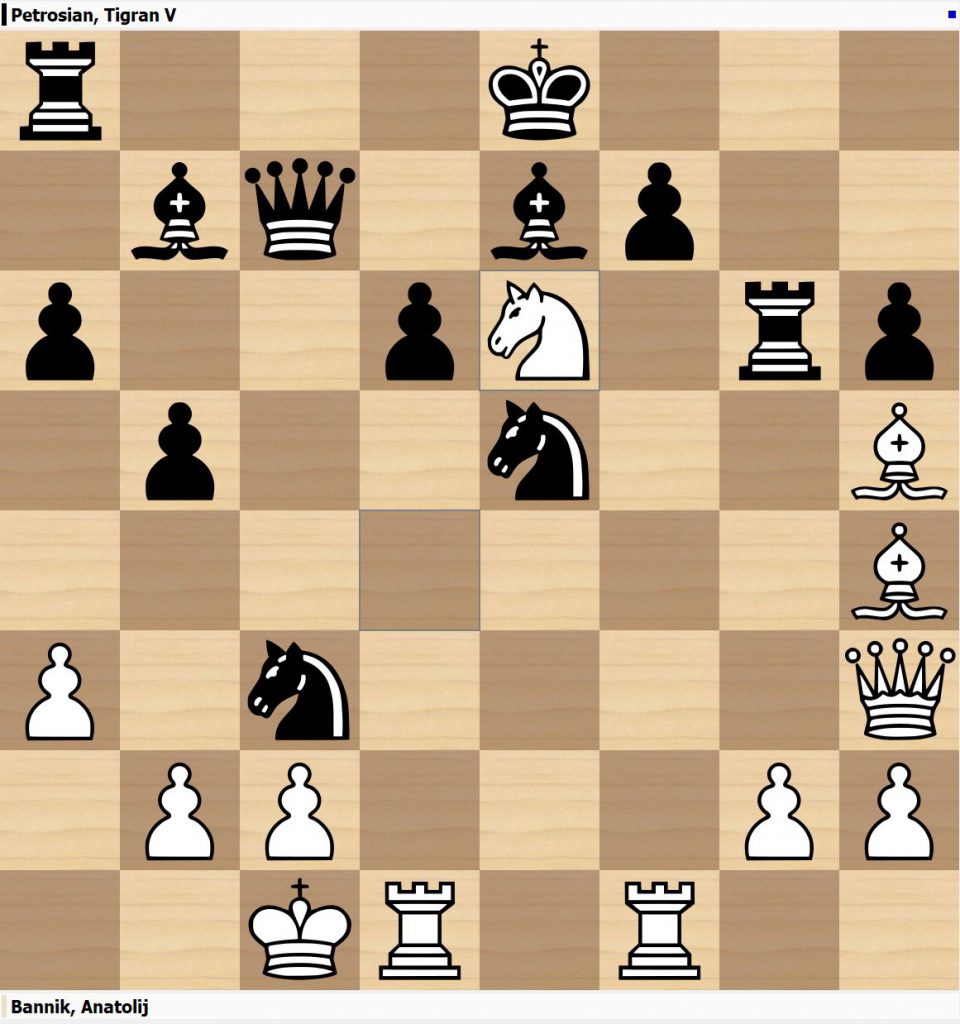 Quite a while ago, Steve Giddins gave me some photocopies of articles from old Russian magazines. They were game collections of Russian players, some known, some very obscure to the West. One of the players who fell into the latter category was the Ukrainian player Anatoly Bannik. Bannik won the Ukrainian Championship 5 times and qualified seven times for the final of the USSR championship in the fifties and sixties. Looking through his games and seeing the players he defeated in his career, you realise again how amazingly strong the USSR was in those days! The game we look at here is one of Bannik’s better-known victories, a thrilling win in the 6.Bg5 Najdorf against future World Champion Tigran Petrosian.

An uncommon try in this position: 10.g4 and 10. Bd3 have been the main moves for many years.

A typical idea for Black, made particularly effective by the presence of the queen on g3.

A typical follow-up to the …g5 idea. Black makes sure he can exchange a White knight if it comes to f3 to support the captured g5–pawn. Black now intends to add pressure on g5 with either …Nfd7 or …Nh7 and then recapture on g5 with …hxg5. The net result of this manoeuvre is that Black has secured control of the e5 square for his pieces.

An unusual move, played just 3 times… but by such players! Bannik, Tal and Keres! It seems illogical to give Black the pawn back at once with tempo – after 14…Rxg6 – and not force Black to spend some moves recapturing the g5–pawn. However the move has certain tactical points: 1. The h4–d8 diagonal is kept open, so White can develop some pressure against the knight on f6 together with doubled rooks on the f-file.

2. After 14…Rxg6, the Black rook is lured out to a square where it can be attacked by Bh5. Note however that Black also has some gains from the position of the rook on g6: the knight on f6 gets additional protection while the e6–pawn may also benefit from this.

3. After …Rxg6, Qh3 the queen is eyeing the e6 square for future sacrifices.

It’s strange that the normally cautious Petrosian chose the most active reply!

…b4 would be rather awkward so White has to spend a move defending it.

The most consistent move. Now the two plans collide!

A spectacular position! In fact, Black has a plethora of defensive possibilities that are not too complicated to calculate. However, optically it’s hard to imagine they work: they look so dangerous!

A fantastic multi-purpose move: it attacks e6, h4 and f1 (after …Nxd1!) Unfortunately, it’s too sophisticated for the position! White is now away from the brink of defeat!

b) 19…Rxe6 was the idea I thought worked…and it does too, though less convincingly

Another suboptimal move – it feels wrong intuitively to release the attack on the rook on d1 (and Black’s subsequent attack on the rook on f1). After 20…Ne2+, the White king suddenly looks very safe – much better than Black’s which is a big plus in a practical game. There were still 2 good ways for Black to play.

White is just masses of material up with a mating attack.