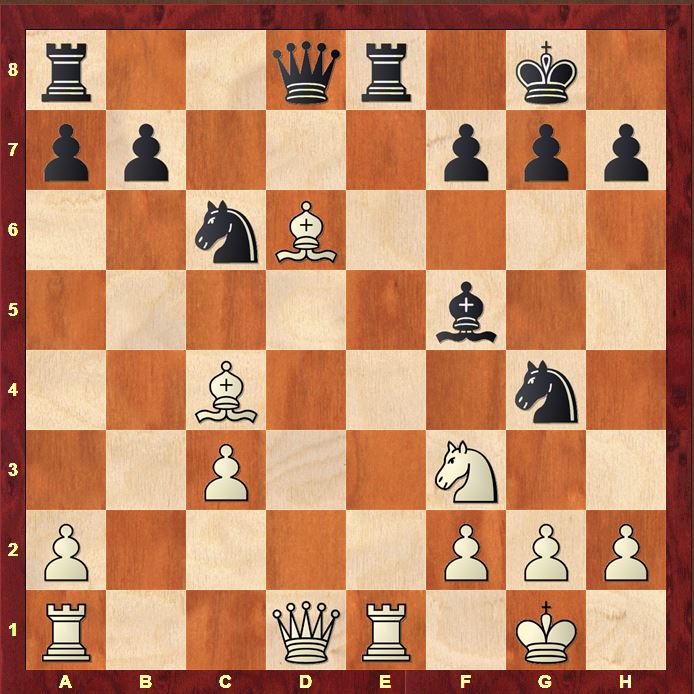 I’ve recently been going through Alekhine’s Collection of Best Games (in the Kindle edition otherwise known as the world’s most complete collection of chess misprints) and stopping whenever a game grabs my attention. I got caught up for a few days by the game Alekhine-Isakov played in 1919, It features a very interesting attack in which – as always – a number of discoveries could still be made! The attack starts after Black’s 13th move (13…Bf5)

This is the first point of the attack. The king must go to f6 as 15…Kg6 loses to 16.Rxe8 Qxe8 17.Nh4+. The king is very badly-placed now and gets in the way of his knight on g4 which White tries to exploit immediately.

The crucial juncture at which Black has 3 possible continuations. We’ll start with the move played in the game: 16…Be6

Here Alekhine played 17.Qd2 but White has a more forcing continuation that occurred to me pretty much immediately. Strangely enough, I haven’t seen it mentioned anywhere

This is a typical mechanism in White’s attack in this game: he uses checks with the queen to both misplace the Black king and free attacking squares for his other pieces with tempo (in particular the knight) Here Qf5+ frees g5 for the White knight on f3. By the same token, the simple 17.Qg5+ (instead of 17.Rxe6) Kf7 18.Qf4+ (freeing g5 with a check again for the White knight) would also have been much better for White.

As the intermediate move 16…Be6 doesn’t seem to work, Black should examine the immediate retreat of the knight.

Just as Alekhine did in the game

Now 18.Qd2 would transpose back to the game which was also very strong, but via this move order I think that White has an even stronger continuation.

A similar theme to the queen checks in the variation after 16…Be6. A White piece checks to misplace the Black king and then frees g5 for the knight to enter!

20.Rxe6 Rxe6 21.Qxe6+ Kh8 with a clear advantage for White though Black is still surviving (just!)

I was very pleased when I found this idea. John Nunn only considers 17.Qxa5 which I thought might be an edge for White but Stockfish considers it dead equal.

So does Black have any better? Well if you have any experience analysing with computers, then one defensive idea will pop up into your head straightaway: 16…Qa5 17.Bc5 Qd8! And very soon after that the thought 18.Bd6 Qa5 19.Bc5 Qd8 hug-hug, kiss-kiss, draw agreed! But we have more than that!

This looked pretty good to me and the engines are all very happy with White’s prospects too.

20.Rxe3 is a clear advantage according to Stockfish.

So it just remains to show how Alekhine finished things off! It was maybe a little less forcing, but still very powerful!

Another great attack from Alekhine!