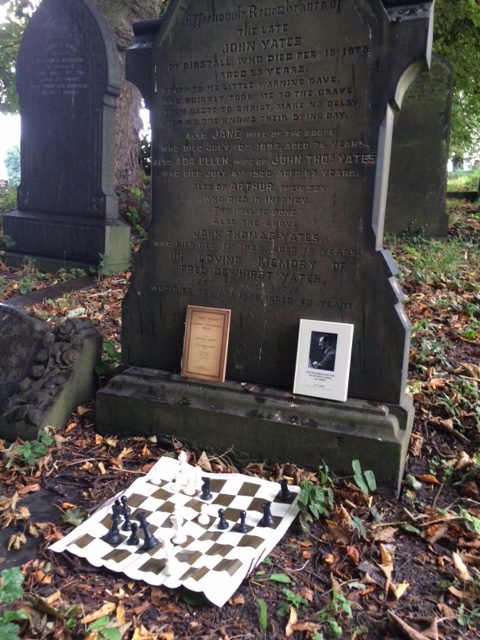 11th November 2016 is the 84th anniversary of the death of 6-times British Chess Champion Fred Dewhirst Yates. F.D. Yates was England’s strongest player from about 1913 (the year of his first British Championship victory) until his early death in 1932. An inveterate 1.e4 player, he was a dangerous attacker and also renowned for his obdurate defence. As WH Watts put it, “Whilst he lacked the profound depth of Lasker and Steinitz, the scintillating brilliance of Alekhine, the uncanny originality of Nimzowitsch, the unerring accuracy of Capablanca, he possessed the tenacity of Yates!” (appreciation of Yates in “101 of My Best Games of Chess” by F.D. Yates)

As the statistics show, he was a danger to all of the top players of his time, recording wins against all of his peers except for Lasker, Capablanca (against whom he had a disastrous score) and (bizarrely) Marshall. A score of 30% from 180 games against 14 of the best players of his generation is a testament to his strength.

I was struck by the high average length of his games against these players. Just out of interest, I blunder-checked all of Yates’ games with an engine (which produces a computer evaluation for each move of the game) and then asked my “Chess for Life” co-author WIM Natasha Regan to work her magic. She came up with the following fun statistic: in 44 of his games between 1909 and 1932 he was still playing on at move 60 with a disadvantage of 2.00 (a clearly lost position). His reputation of not giving up easily was deserved!

Very few of Yates’ best games are known nowadays. Yates’ misfortune was that he was strong enough to force the first-rank players to play well against him, but only infrequently strong enough to prevent them from implementing their plans in brilliant fashion. For that reason, he has been on the receiving end of many defeats in Best Games Collections (Bogolyubow has suffered a similar fate in his games against Alekhine) The final position of Alekhine-Yates London 1922 has been published countless times

In this position, Capablanca unleashed a striking knight manoeuvre to win a pawn by force:

Yates resisted to the bitter end, but had to resign on the 77th move.

In the coming series of articles, I’d like to give some attention to Yates’ own Best Games and make a modest attempt to redress the negative representation of his play in modern chess literature. I used Yates’ “101 of My Best Games of Chess” (published posthumously) as the starting point for my selection of his games.

As a little homage, Natasha and I went to visit Yates’ grave in a cemetery next to St Peter’s Church in the small Yorkshire village of Birstall. Natasha drove about 600 miles to get there and back in one day so I can’t thank her enough for that!

An ever so slightly wobbly board, but a tribute to some of Yates’ best chess achievements: his book of Best Games and his annotations of Alekhine’s 1929 World Championship victory against Bogolyubov, and positions from his win with Black against Vidmar at San Remo 1930 and against Alekhine at Carlsbad 1922. 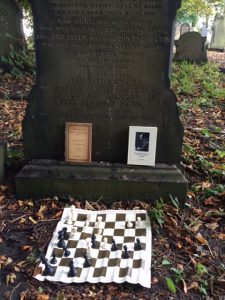 And to round off, a little tour of the graveyard is available at http://matthewsadler.me.uk/matthew-sadler-videos/