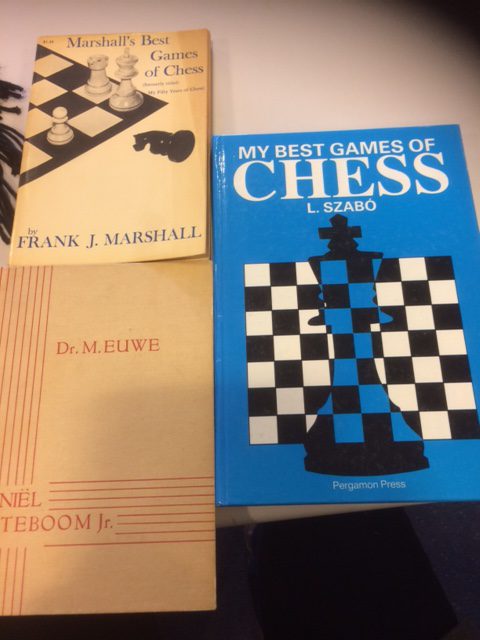 I haven’t had much time for chess analysis for the past few weeks as I’ve just started a new job, but I did take a timeout last weekend for a visit to the Max Euwe centre in Amsterdam. After a lovely afternoon with my nose buried in the late 19th and early 20th centuries, I couldn’t resist buying 3 books for myself: Frank Marshall’s autobiography “Frank Marshall’s Best Games of Chess”, Laszlo Szabo’s “My Best Games of Chess” and Max Euwe’s tribute to the Dutch player Daniel Noteboom Jr who died tragically young (1910-1932).

Frank Marshall’s autobiography is great fun. Perhaps the nicest part is when he describes his experiences at the Rice Gambit tournament in Monte Carlo. Professor Rice was a wealthy chess enthusiast who “discovered” the Rice Gambit and in the early 1900’s sponsored theme tournaments based around his gambit.

This – instead of the normal 8.d4 – introduces the Rice Gambit

was the main line.

As you can see, it was on the dodgy side and very unlikely to be sound, but when you get players of the calibre of Emmanuel Lasker, Mikhail Chigorin and Frank Marshall playing it, you’re bound to have some good games! Marshall describes the event at Monte Carlo as follows:

Because of Professor Rice’s interest in his brain child, he showered generous payments on the analysts, who turned up the most marvellous attacks, which were then followed by the most ingenious defences, which in turn led to even more marvellous attacks, and then… but you get the idea! This was all great fun but playing the gambit in a tournament was quite a job: you had to remember so much that a game with this opening was like an examination on French verbs!

Ah, bygone times! What would Frank make of modern theory I wonder?

The other amazing thing was Marshall’s descriptions of the wild and wacky time controls and tournament formats in the early 20th century. At Nuremberg 1906, Marshall states that “the rules were: no time limit for the first 6 hours of a game, afterwards 15 moves an hour and a penalty of 1 shilling for each minute in excess of this!” He also mentions the Monte Carlo tournaments of 1901 and 1902 in which a draw only yielded a quarter of a point to each player. A play-off decided who got the remaining half! In 1902, Maroczy edged out Pillsbury for 1st prize by ¼ of a point! (after drawing his second game with Tarrasch in the last round!)

Szabo’s book was a revelation to me. I only knew his name from a rather lacklustre performance in the 1953 Zurich Candidates tournament (he finished in 12th place out of 15) and I’d always assumed that he was reasonably average at the world level, but as his career results show, he was very strong, even if his nickname was “Laszlo II” due to his habit of finishing in second place in big tournaments! There are some excellent games but one game in particular caught my eye. There’s always a lot of discussion about how strong the bygone players were: would Alekhine still be strong if he played in the modern era? Well, take a look at what Szabo did in the following game and then compare it with Alekhine’s effort 20 years earlier (http://matthewsadler.me.uk/chess-for-life/alekhines-themes-move-like-morphy/) I think Alekhine was much more convincing! A playable version of this analysis is available at http://cloudserver.chessbase.com/MTIyMTYx/replay.html

As Szabo relates, “I made this move with great satisfaction even though I had no idea that Tartakower had marked this knight move when he analysed the first game of the Alekhine-Bogolyubow match in 1929, with 2 exclamation marks and with the remark “the real Alekhine”. And the very same position was reached in that game, with a different move order”

11.exf6 was Alekhine’s choice which was considerably stronger in my opinion.

An idea that cropped up in Alekhine’s game too!

19…Na4 was recommended by Szabo and it looks strong. If White doesn’t castle, then …Qb6 will keep his king in the centre. The text is much more accommodating

A very neat idea, making sure that White can take on c6 without allowing a recapture with check.

No check! So White can continue with his attack!

A neat final attack but… Alekhine did it even better!

2 Comments on “Happy in the past!”