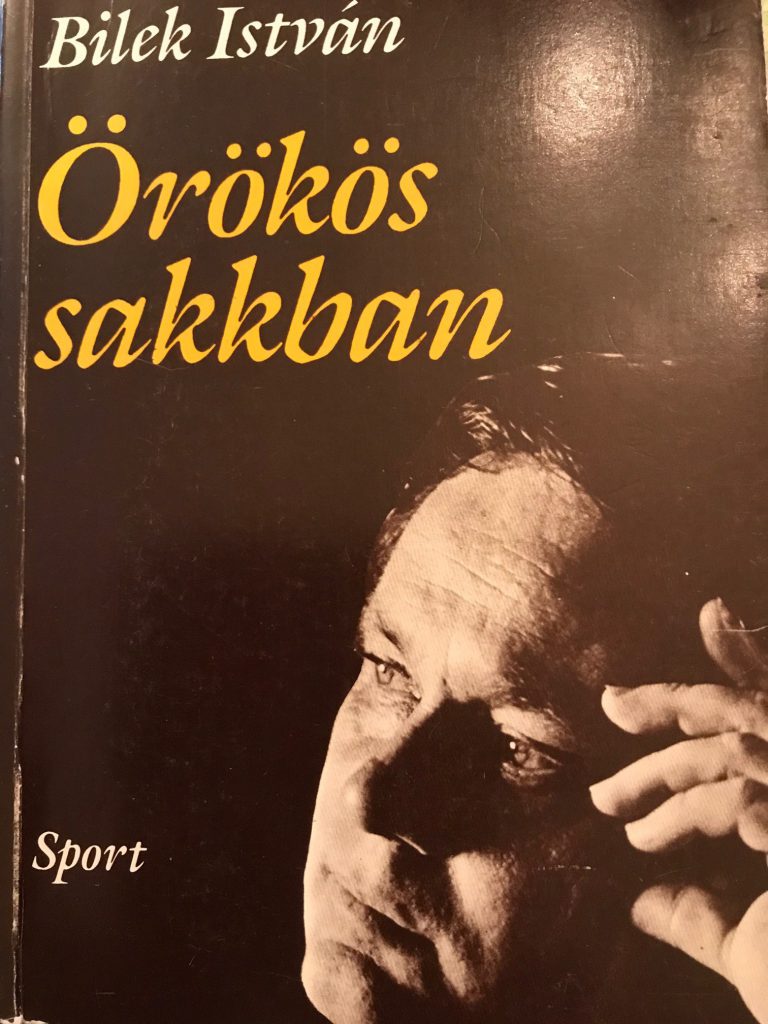 A few months ago, my friend and former coach Steve Giddins decided to sell the greater part of his fantastic chess book collection. My tiny flat is already creaking under the weight of the review copies I receive every month from New in Chess, but I purchased the maximum I could fit in! One excellent book I’ve been spending a lot of time on is a collection of Best Games by 3-time Hungarian champion, Istvan Bilek. Bilek was a strong player in the 1960s and early 1970s, rated 2500 (=73rd in the world) in January 1971 – the 3rd highest Hungarian player behind Lajos Portisch and Laszlo Szabo, equal with Gyozo Forintos and ahead of Istvan Csom and Levente Lengyel.

His book is in Hungarian so I’m unfortunately not getting much out of Bilek’s recollections from his life, but  – despite some rather odd letters for the pieces – the games are no problem! Bilek was an interesting player, playing both Open Sicilians and 1.Nf3 2.g3 systems as White and the Modern Opening with Black. As I’ve mentioned before, I like reading through old books and trying to spot analytical mistakes as a training exercise. The scepticism that makes you question what is written down on the page is an excellent frame of mind in practical games where you should always assume the opponent’s last move is a mistake just waiting to be exposed!

Judging from his games, nerves (or maybe severe time-trouble?) seem to have been a problem for Bilek as there are a number of missed opportunities and panicky reactions to unsound tactics in his games. But there are many good games too, and many interesting variations unearthed by Bilek in his analysis.

In this column, we take a look at a tactical battle with the great Mikhail Tal in 1967! This game is annotated by Sergei Dolmatov for Chessbase but something seems to have gone wrong there – for such an exceptionally strong player, these annotations really don’t do justice to the fight!

An unusual twist in a King’s Indian Attack position. White normally blocks the centre with e4–e5 and then starts up kingside play with h2–h4–h5–h5 and Nd2–f1–h2–g4. Bilek spots small flaws in Black’s position and tries to exploit them in a concrete way.

Highlighting the loose pawn on b5, now attacked by the queen on e2. It’s just a pin-prick however, and Black has a choice of reasonable-looking defences.

My first impression was that this was a little awkward for White, being forced to move the queen for a second time in the opening. However, Black is actually the one who has to prove something in this position. If the dark-squared bishop retreats (for example – 15…Bf8) to avoid giving White the 2 bishops, White replies with 16.Be3 and can claim that a slight advantage due to Black’s isolated d-pawn and White’s solid grip on the d4 square. Black may also regret moving the b-pawn forwards to b5 in this position, as the c5 square is now harder to defend.

Exclamation mark from Bilek! It’s not the engines’ favourite move, but an excellent and surprising practical choice. Black is forced to solve some unusual problems.

It’s at this point that Tal loses the thread of Black’s position. It’s fairly clear that White’s next developing move will be 19.Bg5 attacking the knight on f6. In that case, after Bxf6 …gxf6, Qxf6 Black would much rather have the bishop on f8 to defend the Black kingside than remote on d6 and en prise.

This is really risky!

The engines flag this as a big mistake: Bilek makes no mention of it!

Another poor move from Tal. I guess he was trying to be extra tricky, because I would have expected him to spot the opportunity he had on this move!

21.Rxe4 was Bilek’s moment of glory that he also points out in his notes!

21…Nxf5 22.Rxe8+ Bf8 but now Bilek mentions the best variation but rejects it in favour of a beautiful but flawed line.

2 exclamation marks! is the point of Bilek’s line which is indeed confirmed by the engine. The Black king is indeed very short of squares, and funnily enough… so is the Black queen! 27…Nc7 28.Rxf8+ Kh7 29.Bc5

is the beautiful main point!)

25…Qa6 however was my refutation … and the engine confirms White is busted.

Again opening an attack against the f2–pawn!

It’s all collapsed! A lucky escape for Tal!