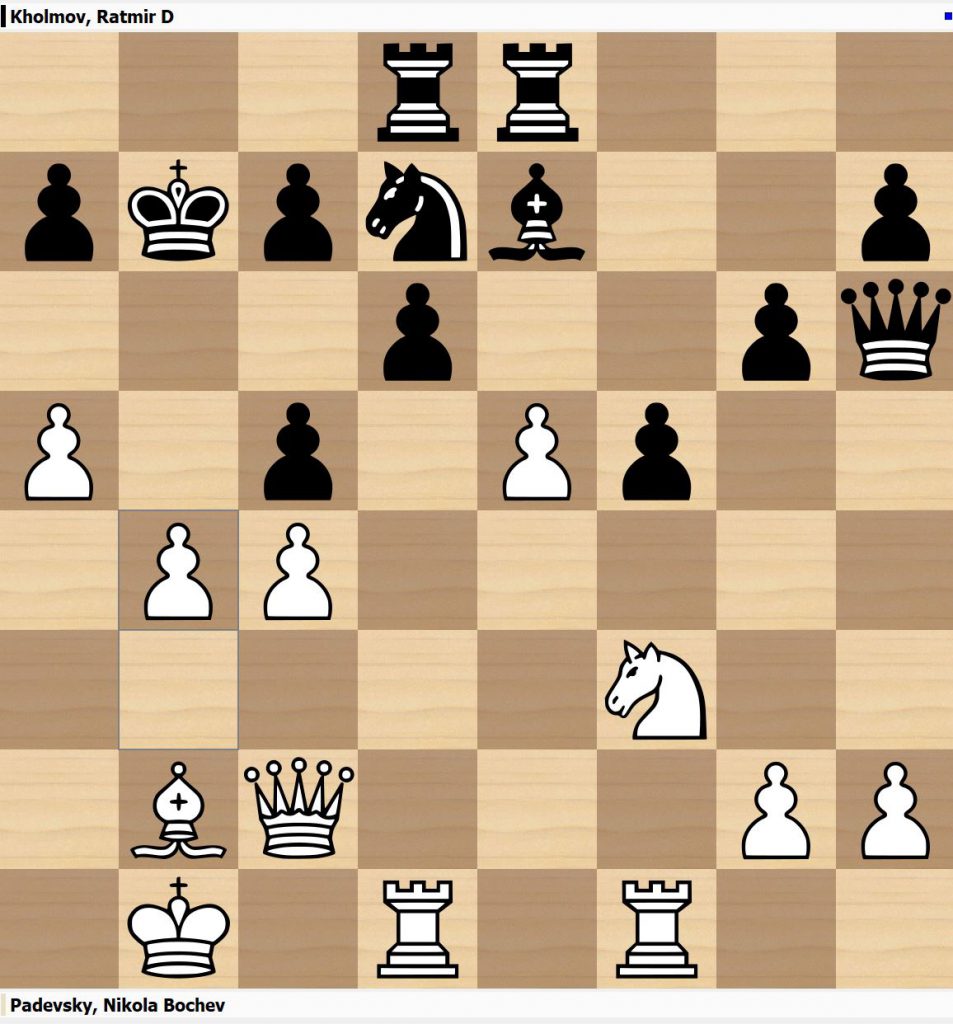 Another Steve Giddins book I’ve been getting into is the Best Games collection of Russian Grandmaster Ratmir Kholmov (1925-2006). Best known in the West for convincingly beating Bobby Fischer at Havana 1965 on the Black side of a Ruy Lopez, Kholmov is one of many extremely strong Russian players who – for whatever reason – were allowed only infrequently to play events abroad. However, a man who ties for 1st in the Soviet Championship in 1963 (tied with Spassky and Stein) is likely to have been one of the strongest players in the world!

The game I have selected is not one of Kholmov’s best games – in fact, it should have been a wonderful victory for his less illustrious opponent, Bulgarian Grandmaster Nikola Padevsky. It does however show Kholmov’s resourcefulness and resilience for which he was apparently known as “The Central Defender”!

11…g6 as well as 11…f6 have been the main moves in recent times. Kholmov goes for a more modest development of the bishop to e7.

Both White and Black have gone through the opening contortions that are part and parcel of the Scotch. Both queens have moved twice in the opening to free the king’s bishops they had blocked in! White has thrown pawns forward with abandon before completing his development and Black has transferred the king’s knight to the appalling square b6! After 15.Qc2, White’s development is on the home stretch: the idea Bd3–e4 would justify White’s setup completely. Kholmov takes the risky decision to grab a pawn before White is fully mobilised.

For the next series of moves, Padevsky plays with great purpose to exploit the activity he gained in return for the sacrificed pawn on f4. Black’s main gain from winning the pawn on f4 is that future …d6xe5 will eliminate the White pawn centre; however, Black must be careful as White’s pieces are currently well-placed for that scenario: Nf3xe5 could be very painful for Black!

Beautiful strategy: Black’s best (only!) defensive piece is exchanged after the knight has been chased away with a rook’s pawn. That rook’s pawn is also a very dangerous attacking unit in itself once it reaches a6.

A crucial defensive move, taking away e4 from the White queen.

Padevsky plays with wonderful energy! This move will open the b-file and also prepares to infiltrate the queen on the queenside light squares via a4–b5. This move was also the engine choice.

Ingenious defence from Kholmov! Black is looking to block the b-file with a knight on b4.

a) 23…cxb4 looked reasonable to me when the Black knight gains the c5–square to defend.

is a shocker however: it hadn’t occurred to me at all!

b) 23…a6 is the engine’s main choice, preventing a6+ and covering the b5–square. The engine still thinks the position is equal, but there’s only 1 colour I’d like to me in a practical game! 24.e6

b3) 24…Nb8 25.b5 also looks extremely passive for Black who can no longer move his knight.;

Another good attacking move, freeing b1 for White rook and getting the White king out of random checks along the b1–h7 diagonal. It’s certainly not the best according to my engine though!

a) 25.b5 looks sensible here, stopping the knight from activating itself on c6 and introducing the ever-present threat of ba;

Kholmov blinks. As we have seen so often, the safest place for Black is the corner! Not that intuitive! The fact that the knight on b8 is defended and the ability of the Black queen to activate itself via e3 to aid the defence of the queenside light squares seems to be just enough.

26…Ka8 27.Rb1 d5 (27…Qe3 28.Bd4 Qe4 is another idea demonstrating the key defensive idea: retreating the king to a8 keeps b8 defended which takes away any Qxb8+ and Bc1+ ideas. This allows Black to focus on defending the b7 square which he will ideally do by activating his queen on h6. White still has the initiative however) 28.Qa4 Qe3 29.Nd4 dxc4 30.Ne6 Rc8 31.Qxc4 Qe4 is balanced according to my engine. It still feels very fraught for Black, but now the Black queen is active, the exposure of the White king also makes itself felt.

The start of some probably time-trouble induced – and very entertaining – randomness!

One of those unexpected and unpleasant activations we mentioned earlier.

The Chessbase score ends here but Kholmov continues a little further. The position is lost in any case: the connected pawns are too strong.