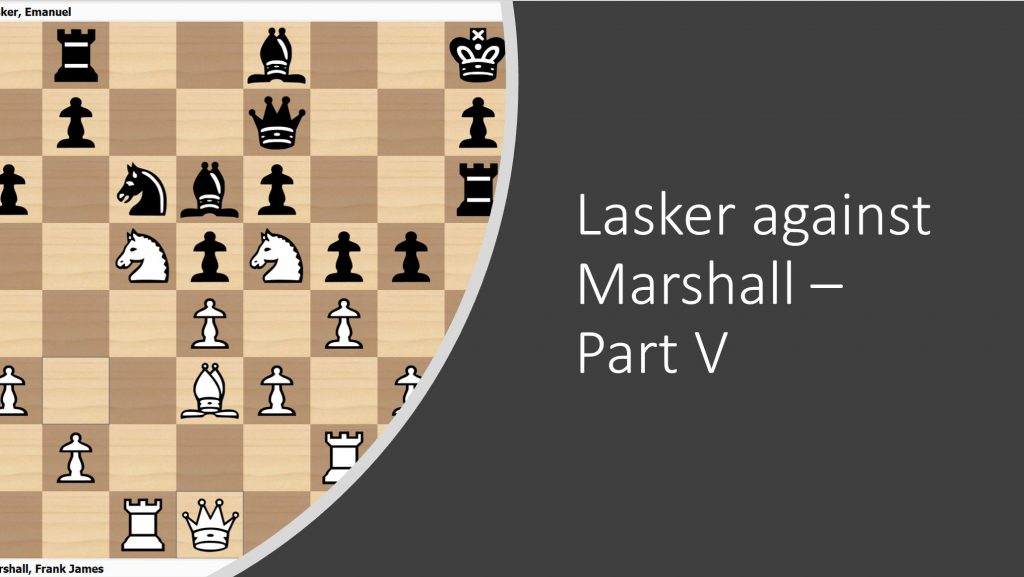 The last game in this series was a Marshall near-miss: the exciting game where Marshall was White against Lasker in New York 1924. The game featured an Exchange Slav – a favourite of Marshall’s (“A capture I have favoured throughout my career, and with very good results”) which was later taken up with great success by Botvinnik. It’s another example of Marshall’s knack for discovering interesting opening systems!

A video of this article is also available at

As always, a playable version of this game is available at

[A little exotic but based around a good positional concept. White aims to turn the tempo advantage in this symmetrical structure into a more active positioning of his queen’s bishop (outside the d4–e3 pawn chain) relative to Black’s (inside the d5–e6 pawn chain). The queen prevents the light-squared bishop from developing to f5 by targeting the b7–pawn. It’s a common concept in the Exchange Slav but played here at an unusually early stage!]

[A strange, yet typical episode of play during which both sides have tried out the exchange of knight for bishop on various squares! Marshall did not want the knight to establish itself on e4 and this decided to exchange it on f6.]

[15.Ke2 Nb4 16.Bb1 b6 is given by Marshall. The retreat back to c3 is a little embarrassing for White but doesn’t materially affect the position. In fact, Black should simply bring the queen back to d8 on one of the ensuing moves!]

[15…Qd8 16.0–0 Bd7 would be a sensible way to develop. By trying to exploit the queen’s presence on a5 – it’s understandable that Black should try to punish White for (probably) missing …Qa5+ – Black ends up misplacing his pieces slightly.]

[Opportunistically exploiting the queen’s exposed position on c7: the knight on e5 exerts strong pressure on the Black queenside, and after 20.f4, White’s knights are both entrenched on the central dark squares around Black’s light-squared pawn centre. The one advantage to 20.f4 from Black’s point of view is that the f-pawn is brought closer to the Black position. This brings Black’s counterplay with …g5 into contact with White’s position much quicker than before!]

[This is a very interesting position from the strategical point of view and it is well worth paying attention to the coming developments in the game. Perhaps the first odd thing to me is that White seems to stand

well when it feels as if White has wasted quite a bit of time:

i. The bishop manoeuvre Bf4–g3–e5xf6 in order to exchange a bishop for a knight (albeit with a purpose: to stop a black knight from occupying the outpost on e4 that Black had prepared for it with …d5 and …f5).

However, both these two manoeuvres involved a cost for Black as well:

ii. Although 14…Qa5+ checked White’s plan, White’s basic position was not disrupted by the check. The white knight was able to retreat to a good central square while the black queen was actually poorly-placed on a5 once it had completed its disruptive purpose. It’s an example of a frustrating practical episode in which the opponent misses a move but the move you gain is of no use for your plan!

In the game, Lasker tried to exploit White’s loss of time by leaving the queen out on a5 and eventually bringing it to c7 rather than d8 (although you could argue that the latter was forced upon him by circumstances). The net result was that Lasker allowed 19.Ne5 which would not have been possible if his queen had been retreated safely to d8 earlier!

vWhite has arranged his pawns and pieces as Capablanca recommended in “Chess Fundamentals”, placing his pawns on squares opposite to that of his bishop. This has led to an ideal structure against the two bishops: White’s pawns on dark squares restrict Black’s dark-squared bishop while Black’s light-squared bishop struggles to get past its own central pawns on light squares. The danger to White’s structure is that the strain of restraining Black’s position falls on the pawn structure on dark squares which misses the support of the dark-squared bishop. This weakness is not visible while White’s pieces are so solidly entrenched on dark-square outposts – as are the knights on c5 and e5 – but when White attempts to expand his position (which may necessitate moving or exchanging one of the knights) then White’s position will be more exposed and thus more vulnerable. Black should also contribute to the erosion of the foundations of White’s structure by organising breaks against White’s structure where possible. The break …g5 – as Lasker played – is the obvious candidate in this position. We will play through the next few moves quickly and then assess what happened.]

[A logical move. As Alekhine points out, “Should Black now remain passive, White withdraws his queen from b3, plays b4 and quietly prepares b5 which would hold out an easy game with pressure on b7”]

[25…Bxc6 would be better but White is still better. The queen comes to e3 and the white knight will be rerouted to e5 when White is solid and is ready to gain space on the queenside by pushing the a- and b-pawns. 26.exf4]

[Such a lot has happened! What have both sides achieved? Black has clearly achieved some success in shaking the foundations of White’s position: White has exchanged off his knight on e5 – which blocked the attack of the dark-squared bishop against the f4–pawn – and accepted an isolated d4–pawn which is also no longer shielded along the h8–a1 diagonal by a knight on e5. Why did White play these 2 moves 25.Nxc6 and 26.exf4? First of all, the move 25.Nxc6 was essentially forced from a tactical point of view: 25.gxf4 would have lost on the spot to 25…Nxe5 26.fxe5 Qg5+ winning the e3–pawn. However, apart from this, gxf4 is a fundamentally wrong reaction to …gxf4. With his rooks split apart – one on the queenside and one far away and with poor mobility on h6 – Black cannot challenge effectively for the one open file on the board: the c-file. Opening the g-file on the kingside is a great result for as it activates the rook on h6 and also gives the rook on b8 an extra route into the game.

White might have taken better precautions earlier against the threat of …gxf4 as on the 23rd move, Black could have taken on f4 when 24.exf4 loses the pawn on d4 and the intermediary 24.Nxc6 is met by 24…bxc6 opening the attack of the rook on b8 on the queen on b3. For example, 21.Be2 g5 22.Qd1 would defend the d-pawn and allow White to recapture on f4 with the e-pawn without needing to exchange on c6. However, even after the capture on c6 in the game, White’s position after 26.exf4 is still very strong. The d-pawn can be well-defended by a queen on e3, while Black’s counterplay against the kingside is surprisingly hard to prosecute, not least because his queenside pawns and e6–pawn are so weak.]

[26…a5 as pointed out by Alekhine, feels more natural as it will at least force White to use his queen to capture the a-pawn. In the game, it’s really no effort at all for Marshall.]

[Alekhine calls this “artificial” but I really like this move. The knight occupies its strongest central post, blocking any diagonal attacks of the  central or kingside dark-squares. It makes White’s position completely safe and leaves White in control with an extra passed a-pawn.]

[This feels odd when White still has a number of moves he could play to improve his position further. I’m also not too thrilled about exchanging that wonderful knight on e5 for the bishop on e8!]

[39…Bxc6 40.Rxc6 Qb4 looks much more like it: you feel that there will always be chances with such a vulnerable d-pawn.]

[Despite a lot of thought, Marshall misses the win… and Lasker’s defence!]

[A few more mistakes were made but Marshall was unable to capitalise on his chances and Lasker held on for a draw.]

2 Comments on “The Lasker-Marshall rivalry – Part 5. Lasker’s struggle against the Exchange Slav”