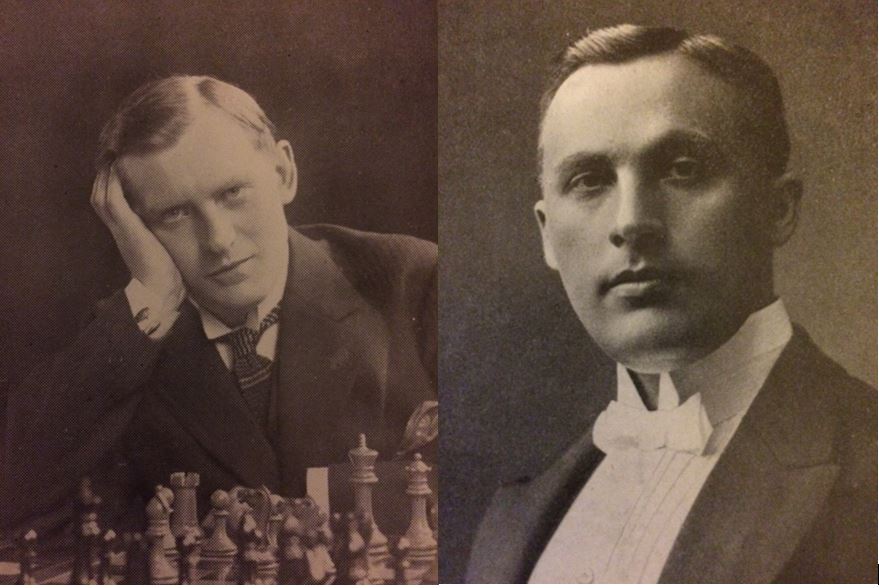 Bogolyubow’s preparation for the World Championship match was to take part in the strong Carlsbad event of 1929 in which he came 8th with 11,5 / 21 (Nimzowitsch won with 15/21). He lost a superior ending (2R & 2Bs vs 2Rs & 2Ns) with Black in the last game against Becker in the 21st round and had to face Alekhine with the same colour just 8 days later. Between 31st July and 19th September 1929, Bogolyubow played 29 top-level games in 50 days. I can imagine that he was looking forward to the 2-week break in the match after the 8th game!

It wasn’t a restful way to prepare for a tough World Championship but maybe Bogolyubow felt that he needed some top-level practice going into the match as his last tournament dated back to September 1928. In any case, Bogolyubow kept his customary good humour after the result as Nimzowitsch relates in his book of the tournament:

Alekhine hadn’t played that much serious chess either since his World Championship Match against Capablanca in 1927, concentrating mainly on a huge series of simultaneous exhibitions all over the world. The one exception was a modest event in Bradley Beach (3rd-12th June 1929) which he won with 8,5/9 (2nd L.Steiner 7/9, 3rd Kupchik & Turover 5,5/9) though his play was less convincing than the score suggests.

Alekhine described Bogolyubow’s approach in this fashion in his preview of the Carlsbad 1929 tournament written for the New York Times (cited from http://www.chesshistory.com/winter/extra/carlsbad.html)

Only eight days after the conclusion of the Carlsbad tourney I shall be called upon to defend my title. The challenger is no less a person than Bogolyubow, victor of the Moscow and Kissingen tourneys. Consideration for himself apparently did not prevent this grand master from entering the lists at Carlsbad, and in this connection the following must be taken into account: a challenger has much less to risk than the defender of the title.

Bogolyubow says he welcomes such active training before his match with me as this tourney imposes. It will soon be demonstrated who is right, Bogolyubow with his reckless optimism or I in my determination to husband my powers by practice and a rigid abstention on this occasion.

Assuming that Bogolyubow had already decided what he was going to play against Alekhine beforehand, it’s interesting to look at the openings that Bogolyubow chose at Carlsbad. It seems that he was keeping some of his preparation under wraps. With such a long tournament however, it was impossible not to give away some clues:

In this article, I would like to focus on the course of the first 8 games. This was probably the most interesting part of the whole match.

After a crushing win in the first game (discussed in a previous blog article http://matthewsadler.me.uk/chess-for-life/alekhines-themes-move-like-morphy/) Alekhine was frustrated in the next 2 games, failing to convert 2 winning endgames after strong disciplined play in the 2nd game, and old-fashioned “keeping on playing” determination in the 3rd game. All credit to Bogolyubow for keeping on fighting until the very end, but the draw in each case was primarily due to Alekhine’s lapses rather than to Bogolyubow’s good defence:

A typically active offer from Alekhine which Bogolyubow unwisely accepts. To me, it’s curiously reminiscent of the 10th game where Bogolyubow also allowed Alekhine to push a passed pawn much further than he should have been able to!

Instead of trying at all costs to hold his blockade on c4 with 30.Rc1 (which should be possible without too much difficulty) Bogolyubow allows Alekhine to push his c-pawn all the way to c3.

Back to the main game now:

31.Rxd3 Qxf2 32.Rg1 is a tiny bit unpleasant, but you can imagine that White should grab the opportunity to get rid of the enormous passed pawn on d3. After spurning this opportunity, White is in big trouble!

An amazing error from Alekhine and completely uncharacteristic: he was fantastic in major piece endgames.

Bogolyubow offered a draw at the adjournment but Alekhine elected to carry on.

A critical position according to Winter and Yates.

A big mistake according to Winter and Yates.

45…Be8 46.e5 fxe5 47.Kd5 wins according to Winter and Yates in their book on the 1929 World Championship Match. However, this just seems to lead to the (drawn) position that occurs later in the game 47…Bb5

A great escape for the challenger!

I have the feeling that the frustration Alekhine experienced at letting Bogolyubow off the hook in consecutive games played its part in the next 5 games which were all decisive. In game 2, Alekhine had not faced any particular problem with Black and he had outplayed his challenger without risk from a relatively simple position. The natural tactic would be to sit back and ask Bogolyubow to demonstrate something new in this line. However, it seems to me that Alekhine lost his equilibrium a little and in his next 2 Black games, he started to vary himself with somewhat experimental ideas. At this moment we see Bogolyubow’s strength emerging.

Just a little digression, Bogolyubow is a player I’ve always found difficult to appreciate. He seemed efficient at getting past the second-rank masters, good against his peers like Reti (career score: 19,5/29), Spielmann (career score: 26,5/44) and Tartakower (career score: 15/26) and – just like everyone else around that time – suffering against the very top guys like Capablanca (career score: 1/7), Lasker (career score: 2/8) and Alekhine (career score: 36/94). However, I couldn’t warm to his style which seemed to be mostly about playing decently, avoiding major blunders and then picking up the easy spoils when his opponents did (which happened a lot more regularly in those days).

However, looking at Bogolyubow’s play in the context of the match, I got a better idea of what he was capable of. When Alekhine started experimenting, Bogolyubow reacted very cleverly. He avoided overreacting which would allow Alekhine to demonstrate his wonderful feel for activating his pieces quickly at an early stage in the game (see http://matthewsadler.me.uk/chess-for-life/alekhines-themes-move-like-morphy/ as mentioned before for an example of that!) but at the same time he avoided excessive passivity which would lead to a similar result! He got his approach just right and in so doing, he set Alekhine opening problems to solve that were too difficult even for the World Champion. Take a look at game 4:

A sharp and risky move that to my knowledge had been played just a couple of times earlier. Bogolyubow reacted in the most principled way.

An excellent choice by Bogolyubow. I imagine that Alekhine was looking forward to ideas such as 8.b4 Nce4 9.Qd3 d5 10.cxd5 Nxf2 as occurred in the game Thomas-Winter London 1927. Bogolyubow’s choice had been played by Rubinstein against Johner in the 15th round of the Carlsbad tournament just before the match so I’m sure both players were familiar with this way of playing.

8.f3 prevents any immediate central adventures by taking away e4 from the Black knights. It also threatens to gain central space with e4 and to clamp down on the dark square weaknesses (d6 in particular) that Black has left himself by combining the move 4…c5 with the exchange of the dark-squared bishops. I’m sure that Alekhine was trying continually during the game to get the explosive …d5 break working but the realisation was too difficult and he ended up accepting an inferior and passive position. It was only later in 1990 that Nick de Firmian showed a way of playing that I’m sure Alekhine would have loved to have thought of

All Black’s opening moves (4…c5, 6…Bxc3+, 8…a5) have left horrible holes that White’s pieces will gratefully exploit. Alekhine goes for violent struggle instead of passive defence but Bogolyubow is up to the task!

Alekhine reacted well with a beautifully-played queenless middlegame win in the 5th game that made it into his Best Games Collection! However, the pattern of the 4th game repeated itself in the 6th game. Another experiment from Alekhine, another response of controlled aggression from Bogolyubow, and this time a long, painful downhill slide for Alekhine.

Things were looking up for Bogolyubow! A potentially disastrous start to the match turned around into parity after 6 games and already 2 good wins against the World Champion! That makes it all the harder to understand what happened in the 7th and 8th games. I have the strong suspicion that the effort of playing a 21-round tournament just before the match started to take its toll. From a good position in the 7th game, Bogolyubow – uncharacteristically – blundered his position away in one move:

Bogolyubow had missed a chance a couple of moves earlier to get an easy advantage with no risk, but he’s still perfectly fine

Throwing the game away

Black has 3 pawns for the exchange but his pieces are awful and his king’s position is very weak.

In the 8th game, Alekhine again played riskily and experimentally with Black but this time Bogolyubow looked jaded – maybe a little depressed after the previous game – and played very poorly, putting his pieces on second-rate squares while leaving himself exposed by expanding in the centre. Alekhine doesn’t just punish – he annihilates!

Bogolyubow has played a little strangely, placing his bishop on the passive square b2 (e3 would be more natural) and advancing f3–f4 a little early. Alekhine’s reaction is brutal!

This reminds me of Alekhine’s play in the 17th game of this match. There also, he generated confusion in the position by chasing after a knight with a rook’s pawn at an early stage of the game

I’m sure you can guess what happened!

with a massive position for White

Back to the main game!

Fantastic mobilisation of his forces by Alekhine! EVERYTHING is attacking! Bogolyubow has been unrecognisable in this game.

Bizarrely enough, the 1934 match between Alekhine and Bogolyubow saw an almost identical scenario. After a desperately disappointing 8th game for Bogolyubow in which he threw away a win on the 56th move, Alekhine played the 9th game in a very unorthodox manner:

Again Bogolyubow played very weakly and lost without a fight.

Back to 1929! After the 8th game, the match was adjourned for 2 weeks which was probably a welcome respite for Bogolyubow! The rest of the match proceeded along a similar pattern with Alekhine steadily increasing his advantage though never able to pull away completely – he lost 3 more games until the end of the match! We’ll take a look at the highlights of games 9-25 in future blog posts!