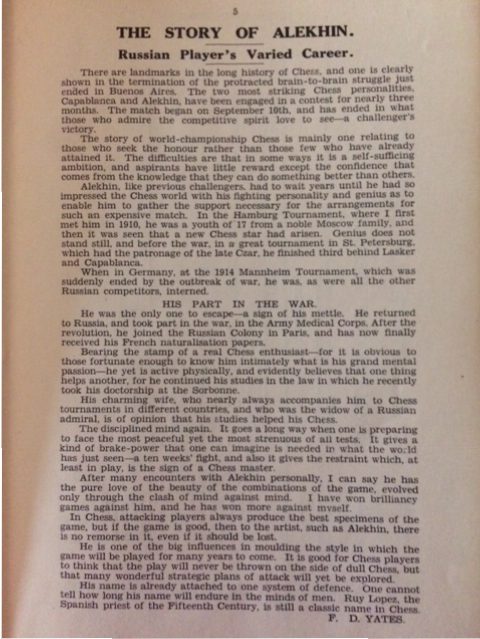 The book that got me into Alekhine – Bogolyubow was a book of the match by Yates and Winter that appeared in 1930. If truth be told, I have a few doubts about the scale of Yates’ contribution to the book. Winter wrote a short biography of Bogolyubow and also the theoretical review of the match. Yates wrote the introductory text about Alekhine, but it read a little strangely as if it had been written just after Alekhine’s victorious match against Capablanca:

Bizarrely enough, that is the case! Looking through the British Newspaper Archives, I found an article by Yates in the Yorkshire Post of 29th November 1927 that is word-for-word the same article!

Anyway, back to the chess! Alekhine restarted the match in very controlled fashion with Black winning 2 smooth games in the 10th and 12th games. Unexpectedly however, he then lost the 13th and 14th games in poor style. Just take a look at the positions he lost:

Black is a little better due to White’s queenside weaknesses (in particular the pawn on a3) but it’s a bit shocking for Alekhine to be completely lost within 4 moves!

The 14th game was maybe even worse as Alekhine contrived to lose this position as Black:

I think that these games say a lot about Alekhine’s mindset for the 1929 match and the difference with his match against Capablanca. Against Capablanca, every full point was like gold dust and Alekhine scrapped to the death to save inferior positions.

Against Bogolyubow, I have the feeling that Alekhine had the same attitude as the Brazilian football teams of the 70’s: “You score 4 goals, we’ll score 5!” He was confident of always being able to produce a win to order against Bogolyubow so he didn’t always make the supreme effort in defence that he did against Capablanca. He would never have lost the 14th game against the great Cuban! That attitude might also explain how Alekhine got himself into a mess against Euwe in 1935. In that match Alekhine beat Euwe 8 times, but by the last 10 games of the match, he was no longer able to produce a win at will while the losses kept on coming!

Back to 1929, things were looking up for Bogolyubow, but he was unable to keep up the pressure. The 16th game was a very strange game from Bogolyubow. He was in the ascendancy with 2 wins in the 13th and 14th games and a well-played draw in the 15th where after an active pawn sacrifice in the opening, he never looked in danger of losing. To me the 16th game was very reminiscent of the 25th game of the 1934 World Championship Match between Bogolyubow and Alekhine, examined in a recent blog posting: http://matthewsadler.me.uk/chess-for-life/alekhines-themes-dxc4-followed-bg4/

In that game too, Bogolyubow played poorly once he’d achieved pawns on d4 and e4, misplacing his light-squared bishop on the a2-g8 diagonal and seemingly unable to choose between quiet and aggressive play. In the 16th game of the 1929 Match, Bogolyubow was already a pawn down with a lost position after 19 moves.

It’s probably just coincidence, but while flicking through some an old Euwe and Kramer book “Het Middenspel 3” at the Max Euwe Centrum, I came across this example from Bogolyubow-Kramer Travemunde 1951:

Bogolyubow was no longer young in 1951 of course (he died in 1952) so we shouldn’t draw too many conclusions from this game. However, I found the similarities with the earlier Alekhine games rather striking. Here once again Bogolyubow has established a double-pawn centre, and once again he fails to give it sufficient support from his minor pieces, as he misplaces his bishop on h2 instead of neutralising Black’s pressure against d4 by retreating his bishop to e3. It’s the mirror image of what he did in the 1934 World Championship Match against Alekhine when he played Ba2 instead of Bd3 supporting his e4 pawn!

It seems to me that this was the moment when the match really ran away from Bogolyubow. A good solid performance here would have kept the pressure on Alekhine. However, after this game, Alekhine moved into a 7-4 lead and then ran amok in the 17th game, producing a typically powerful and energetic storming of his opponent’s position that again made it into his Best Games Collection to move 8-4 ahead. Bogolyubow did come back though with a gutsy win in the 18th game:

This was fairly new at the time, but it wasn’t Alekhine’s invention. Samisch had beaten a completely clueless Bogolyubow in this line in 1928 so I guess that Alekhine was happy to remind his opponent of that experience. However, Bogolyubow had prepared a new scheme of development. Probably influenced by the fact that he had been mated along the g-file by Samisch, he decided to fianchetto his bishop!

Nowadays they prefer to play 8…a6 and 9…b5 following Morozevich’s example. The only player who plays 8…c6 regularly is a Russian IM called Alienkin(!)

13…Nxe5 14.dxe5 0–0 is Komodo’s recommendation and it’s pretty sensible. The king looks exposed on the kingside but the pawn on g3 and bishop on g2 are not that useful for launching a kingside attack! 13…Nb6 intends to achieve …b4 without allowing Na4, but it is asking a lot of Black’s position to play around a monster piece like the knight on e5!

White had a number of very tempting possibilities here:

d) 14…b4 15.Nb5 Qc8 is Black’s best defensive concept and I had missed the clever idea behind it:

14…Bf6 is not mentioned in the 1930’s book of the match but in his later book “Kings of Chess” Winter suggests 15.Rhe1 Bxe5 16.dxe5 b4 17.Ne2 Nd5 as fine for Black. 18.Bxd5 cxd5 19.Nd4 does look very strong for White however. Black has little counterplay on the queenside and White will open up the kingside with g4

This move is typical of how Bogolyubow played his best games against Alekhine. Rather than try and refute Alekhine’s risky opening manoeuvres completely, he tried to stifle Alekhine by reinforcing his central control. In the 4th and 6th match games, he did this by meeting Alekhine’s unorthodox play in the Nimzo-Indian with the central space-gaining f3 and e4; here Bogolyubow entrenches his powerful knight on e5 by supporting it with a pawn on f4.

Fine judgement: the strength of this move took a while to sink in for me. White blocks the centre and thus restricts the activity of Black’s bishops. His plan funnily enough is to open the wings either with c3xb4 or with g4. The blocked centre ensures that the opened lines cannot be properly exploited by Black’s bishop pair!

It’s not very easy to recommend an active plan for Black. Optically his position is quite nice – 2 bishops and a central pawn majority – but his position is rather creaky. First of all White is threatening to nab a pawn on h7. Secondly, Black doesn’t have any clear way of exerting pressure on the White position. The second point is worrying because White does have some easy ways to get at the Black position: the c3 break opening the c-file and the g4 break opening the kingside. In general, I think that Alekhine should have tried to at least get his king to safety on the queenside starting with 18…Bd6 defending f7 in preparation for castling. The text allows White to place the Black king in immediate danger with a sharp break.

18…Bf6 was recommended by Alekhine but after 19.Nc1 the knight will come to d3 and c5 with a great position for White.

18…Bd6 Preventing a quick g4 and f5 looks best. White then has 2 ways of playing:

23.Nf4 axb2 24.Nh5 is even stronger according to Komodo but the text is good too. Bogolyubow keeps his position intact and lets Alekhine struggle to create something in the position. The rest of the game is not perfect, but you always feel that Bogolyubow is going to win.

Tragically, this last ray of hope was dashed by another harrowing loss in the 19th game when an endgame blunder cost him the draw that his staunch resistance had earned from a completely lost position. The match was effectively over but remained entertaining as Bogolyubow continued to fight for all he was worth (he might well have scored another couple of wins) and Alekhine let his fantasy run free. From that point of view, it’s definitely worth taking a look at the amazing 20th game. In his entertaining book “Draw!” Heidenfeld wondered why this game had not entered the annals of chess wonders, and I can’t but agree! Just seeing the diagram after White’s 24th move, you know that something remarkable has already happened and that there is much more to come!

I started annotating this game in depth, but at some stage I just gave up and decided to enjoy it! Crazy chess!

A very risky concept for a World Championship Match! Alekhine was not aiming to trade his g-pawn for White’s d-pawn with 14…Nxd5 15.Bxe7 Nxe7 when 16.c5 is a clear advantage for White.

By far the strongest move according to the engines, but an astonishingly risky move for a human to play when there were a couple of very simple alternatives!

17.e5 dxe5 18.Bxe5 Ng4 19.Qe2 is the computer’s way but it isn’t easy for a human to be absolutely sure that White’s porous dark-squares cannot be exploited and that Black’s queen is unable to make its way to the kingside! Bogolyubow’s move is very strange however: I can’t think under which circumstances c5 can ever be useful in this position! I think that both players – probably fairly exhausted after 19 games of the match – were playing on emotion rather than calculation!

Suddenly Alekhine is under attack!

Bogolyubow doesn’t want to give up yet! The text opens up the b3–g8 diagonal and gives Black some new and unexpected worries!

A blunder which Bogolyubow doesn’t manage to exploit in the right way!

This game has a similar feel to the 8th game in which Alekhine improvised in the opening and conjured up improbably strong counterplay from very modest beginnings.

The match ended in the 25th game after a tough fight in which Alekhine once again missed a good chance to push through a clear advantage around the time control.  Alekhine had won 15,5-9,5. A convincing win, but just like in the 1993 Kasparov-Short match we mentioned in the first blog article, you wonder what might have been if the challenger could have maintained his momentum at certain stages in the match!