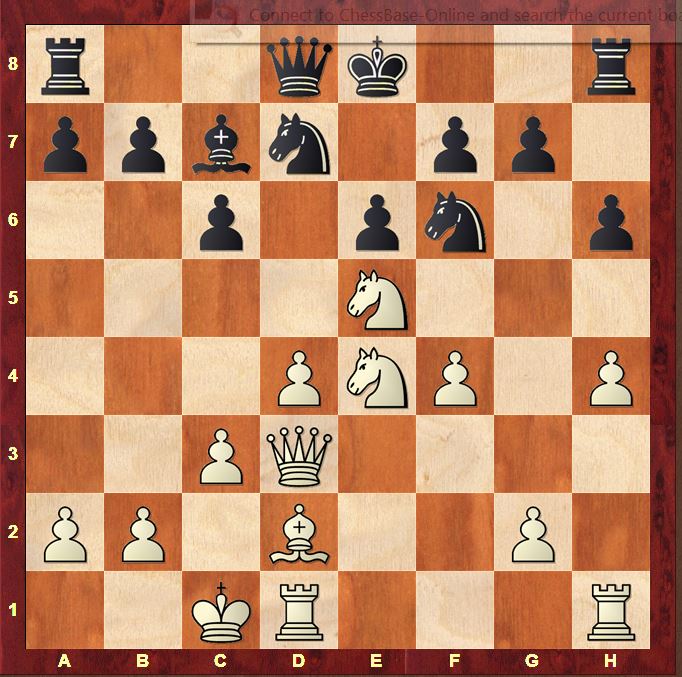 One of my favourite themes is that of the side with too few pieces to cover its (too large) territory. I first came across it in a book I’ve mentioned many times already in this blog: “Best Play: A New Method for Discovering the Strongest Move” by Alexander Shashin. Shashin turns the conventional wisdom of exchanging pieces in a cramped position as a means of relieving pressure on its head… or rather gives it a positive and aggressive twist! He says that the more “compact” side should try to exchange off the pieces of the side with more space because the less “compact” side will inevitably have difficulty covering its extended terrain with fewer pieces.

I keep on collecting examples of this theme and I thought it might be nice to share 2 recent examples I came across.

The first example is taken from a game I played against the Dutch IM Riemersma at the recent Nova College weekend tournament in Haarlem.

I reached this position after 15 moves. After being surprised a little in the opening, I’d decided to offer Black a chance to win a central pawn in return for complications. Instead my opponent pursued a consistent and typical Caro-Kann course of minor piece exchanges.

Once this position appeared on the board, I suddenly thought of Shashin’s theme. White’s territory is fairly large, stretching from the undefended a2 pawn to his structure with pawns on d4, f4 and h4 and the light-square gaps in between them. By exchanging a pair of knights, Black removes a defender of these squares and gives his queen the entry path and space to infiltrate in and dance around White’s pawn structure. White cannot prevent this, or drive Black’s queen back completely: the territory he needs to cover is just a little too large for the pieces he has left on the board.

Black has settled his queen on a comfortable square eyeing White’s porous light squares and has achieved comfortable equality.

The second example comes from the book “Bogolyubow – the fate of a chess player” by Sergei Soloviov. I’ve been playing through a lot of Bogolyubow’s games recently and the following game struck a chord:

Black and White seem to have traded places as Black has a definite space advantage. Bogolyubow pursues a consistent policy of exchanging pieces until Black can no longer defend all the corners of his realm

The result of all these exchanges: Black still has the shell of his space advantage (his pawn structure on c5,d4 and e5) but with so few pieces left he can barely defend it. Notice once again the starring role for the opposing queen which again is the ideal piece to exploit the gaps of varying colour in Black’s position.

A very nasty move and another typical procedure: opening up a second flank of attack