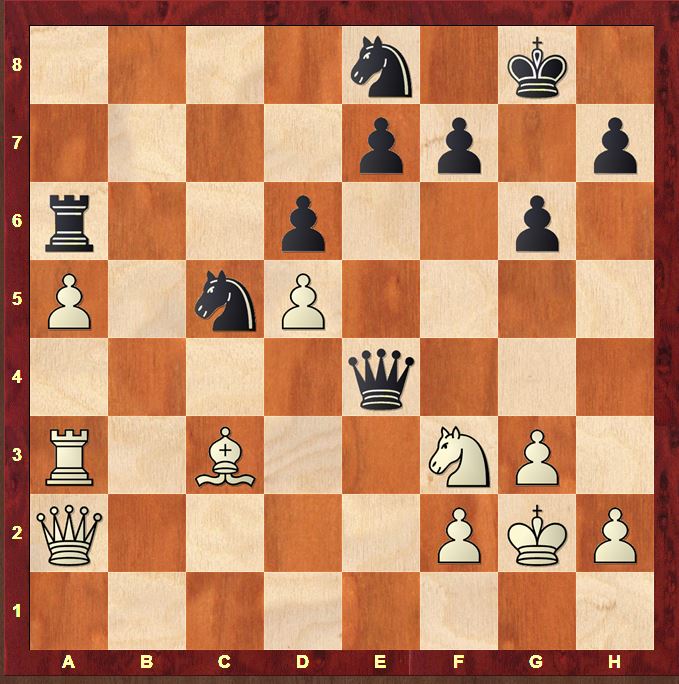 In this column, we continue our examination of episodes from the ROC Nova College Open in July. Going into the last round I was leading with 4,5 / 5 after a tightly-controlled win with Black against the second seed GM Maxim Turov. I had been expecting to play another GM but the pairing system threw up an unexpected pairing against a 2200 player. I had really struggled earlier in the tournament against opponents of this strength, and the last round wasn’t any different. We join the game after 23 moves in a position that is interesting both from the chess and the psychological point of view. As always, a playable version of this game is available at http://cloudserver.chessbase.com/MTIyMTYx/replay.html

A typical Benko position has resulted from Black’s exchange of his dark-squared bishop for White’s queen’s knight in order to regain his gambit pawn. The position is delicate for both sides: White must react smartly to prevent Black from picking up the d5 pawn as well (which he is threatening to do with …Nc7 and …Qxd5) while Black’s position is loosened greatly by the absence of the dark-squared bishop.

It’s worth spending some time understanding the relative strengths of both positions. The strength of Black’s position rests on 3 factors:

This situation reminds me of the Minority Attack against the Carlsbad structures of the Queen’s Gambit Declined which we analysed in great deal in “Chess for Life” in the chapter on Keith Arkell. In that opening, once the c6 pawn was captured, the d5 pawn it was supporting tended to disappear too. Take Keith’s game against the Scottish IM Steven Mannion.

Here also in this position, White runs the risk of not just losing 1 pawn back, but 2!

What has White’s position to offer?

As we shall see, during the game I focused on the tactical factors and neglected the endgame factors and this led me into some difficulties.

So far for the chess aspects. As for the psychological aspects, we enter now a typical sequence in a game between a high-rated player and his lower-rated opponent. The lower-rated player has emerged unscathed from the opening and the resulting middlegame position has limited opportunities for complication: several pieces have been exchanged and pawn breaks from White are unlikely. In general, the first task of the higher-rated player in such situations – apart from playing good moves – is to induce doubt in his opponent. It is essential to make the opponent feel the complexity of the situation and taste the doubt of choosing between equivalent continuations. Without this doubt, a sensible 2200 player nowadays is completely capable of playing such positions to a very good level. Ideally, the pressure should come from all angles: via the position, and via the clock. I managed the second part reasonably, driving my opponent onto increments after having fallen behind on time in the opening phase, but I felt during the game that I was handling the first part very averagely. I felt that I was consistently a move too late with my threats!

From afar (calculating on the 20th move) I was very pleased with this idea, which both sets up Qb2 – with the dual threat of mate on g7 / h8 and invasion on Black’s 8th rank – and the unexpected Re3, hitting the queen on e4 and the pawn on e7 behind it. However, Black turns out to have an easy way to defend against both threats. At home, I felt that

might have carried more danger in a practical game

Black’s standard “lucky” tactical resource, getting out of White’s attack with gain of tempo by attacking the loose queen on a2

Supports the rook in hitting e7 while introducing the  additional threat of Bxc5, exploiting the loose rook on a6

It feels a little dangerous for Black, but actually it isn’t! The alternative IS very dangerous however:

unfairly holds for Black, and with his knight on f3 pinned by the magnificent queen on d5, it will take White too much time to bring this piece into the game (which he really needs to cause pain to Black’s position

Anyway back to the game after 24.Ba1:

Here however, I definitely lost my way for a few moves. The exchange on f6 has fundamentally changed an aspect of the position and White needs to understand whether this should alter his approach to the position.

White’s general approach with 24.Ba1 was to play on the tactical weaknesses in Black’s position – the back rank unprotected by the Black rook, the long a1–h8 diagonal bereft of cover by a dark-squared bishop, the exposed queen on e4 and the loose pawn on e7 behind it – with Black’s king as the eventual target. After 25.Bxf6 exf6, the following has happened. First of all the tactical factors:

Another important point is that positions without queens automatically become extremely tempting for White. For example, if we remove the queens from the board, White has an exceedingly strong outpost on c6 which can no longer be undermined by …e7–e6. Once the knight gets to c6, the a5 pawn is protected which frees the rook to invade Black’s position either via the b-file or the e-file. White’s king might also be interested in heading towards b5.

In the game, I appreciated this last change too little. Part of my problem was that White still has some dangerous threats! I got started on trying to make them work, and I didn’t have the presence of mind to step back at some stage and consider a different approach. Possibly the result of some nerves, possibly due to an overwhelming desire to win which interfered with the search for the best plan in the position.

Another 50–percenter, and this time there’s no doubt that it’s not the right way to play. White wants to force his pieces to the 8th rank and Black has a choice between 2 moves: 26…Qa4 and 26…Qb4. In fact, Black only needs to spot that 26…Qa4 is awkwardly met by 27.Qb2 to make the choice for 26…Qb4 relatively obvious (it stops Qb2)

27.g4 Qa8 28.Nh4 was an interesting idea that attracted me. The idea is that while Black is placing his pieces on the queenside, White opens up the 3rd rank to swing his rook across to the h-file. However, it doesn’t seem to work that well. Even against 28…Nb7! 28…Nb7

I’m not claiming an advantage here for White, but the threat of exchanging queens on e4 and then playing the knight to c6 IS serious. Komodo’s evaluation jumps to +1.33 if you give White the move again in this position! This means that Black is forced to regroup his queen and choose himself a new disposition of his pieces.

is a different White regrouping made possible by the queen vacating d2. The knight can come to c4 (attacking d6 and defending a5) or e4 (if the Black knight moves from c5) while the rook can also come to f3 attacking f6 together with the queen on d4 and possibly with a knight on e4

is even, but you can see at least that Black has been put under pressure from some unexpected areas!

26…Qa4 27.Qb2 requires some precision from Black to survive

29.Re7 Ra7 is a typical defence for Black: the queen and rook combine excellently on the a-file.

An excellent square for the queen, which can check a Black king on h6 from c1, or from h3 if the knight moves from d7

is a nasty and unexpected line. Qg8+xh7+ is the deadly threat

The knight on d7 is pinned as the Black queen is no longer protected by the rook on a5 which means that Black cannot defend f7 with …Ne5. I thought this was just winning but Komodo still finds a draw!

with a perpetual… but good luck finding that during a game!

and now Black needs to find the excellent move 28…Ne4 blocking the e-file, in order to survive without too much trauma. Komodo thinks that the repetition 29.Qb1 Nc5 30.Qb8 is the logical end to the game. 28…Nd7 29.Qc8 Rxa5 30.Re8 is the line after 27…Nd7 above (this was the move order in which I’d calculated it)

My idea, threatening Re8+ and Qe7 but Black has a variety of defensive moves to anticipate this threat: 27…Ra8, 27…Kg7 and the game continuation, covering the e7 square and attacking d5 again.

was my original intention, but to my horror I now saw that this wasn’t even an interesting attacking attempt

So it was time to call a screeching halt to the all-out major pieces on the 8th approach and to try to go back to manoeuvring out some new advantages. However, I’ve fiddled around for a few moves and Black has lined up on my a- and d-pawns so I’m in a much worse situation now than if I’d played 26.Qd2. What irritated me the most was that with 26.Re3, I’ve virtually forced Black into a very solid deployment of his queen to b7 / a8 instead of making Black think of it himself. In the next stage of the game, I try to keep the game going while trying not to do anything too disastrous. The fact that Black’s pawn structure has been ruined helps me to do this. However, objectively Black is heading towards an advantage now.

29.Ra3 Nd7 worried me: the knight is simply coming to b6! I decided that activity would worry Black more.

30.Qd4 was my original intention, but I thought it would be more challenging if I attacked 2 pawns instead of 1!

I didn’t want to do this of course, but I couldn’t see any other way to get my knight on f3 in the game. Of course, Black should have no problems at all after the exchange of queens.

34…Rf8 was what I was expecting with a very safe position. Black can’t really exploit his extra pawn but White can’t do anything either. The text kept me vaguely interested

35.Ne6 is an immediate draw, but I thought I could keep things alive just a little longer

Objectively, Black is still 100% fine, but of course with a rook on the 7th and a stable, well-placed knight on g5 there’s a little something to keep White motivated. Pretty much anything should work here for Black, but he should just take care not to let the White king get active. However, play on increments and the tension and tiredness of the last round began to take its toll.

Essentially the decisive mistake – I think Black had missed that the king can move forwards out of the mate threat. After that, it’s a very difficult position to hold with just increments.40…Ne4 was still fine for Black, though it’s got a bit messier than it should

An amazing transformation. My parents, watching the game at home couldn’t believe their eyes as the computer had been rather pessimistic about my position until then!