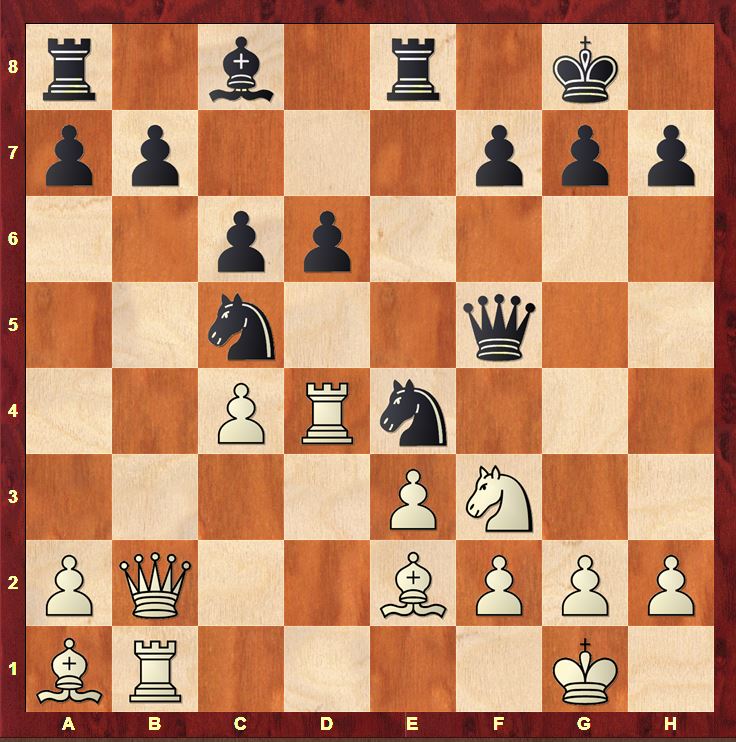 My second game of the 4NCL weekend was a tough battle against Andrew Lewis. As Black, I won a pawn in the opening but never quite managed to neutralise the compensation White enjoyed due to his 2 bishops and my awkwardly-placed queen.

As always a playable version of this article is available at http://cloudserver.chessbase.com/MTIyMTYx/replay.html

After a nervous period between moves 12–18, I felt that I was starting to establish a grip. However, an unstable feature of my position stopped me relaxing too much: my knight on e4. This knight fulfils a crucial role. Firstly, it protects my (extra) pawn on d6. Secondly, it exerts a restraining influence on White’s centre. The queen on f5 and knight on e4 combine against the f2 pawn and keep the White knight pinned to its current post on f3. This in turn prevents White from increasing his central presence with f3 and e4 (which would nail down the backward pawn on d6 still further). The knight on e4 is unstable as it is unsupported by a Black pawn and can be easily chased away by the White f-pawn if White can organise it. The next few moves revolve around White’s efforts to activate his f- and e-pawns and Black’s attempts to keep White caged in.

Protecting f2 and preparing to move the knight away from f3.

Played quickly. I felt this was a powerful response to White’s last move.

From afar, I’d expected 22.Nf3 when 22…Bg4 again prevents Nd2 and prepares to complete Black’s development with …Rad8. While White was thinking, I suddenly realised that 22.g3 actually prepared a concrete idea: Ng2 (defending e3) followed by f3 and e4. I couldn’t immediately find a good response which confused me and made me a little uncertain.

was the first line I considered. It was a difficult one to assess. From my point of view, I’m upping the stakes by giving White 2 bishops against 2 knights. White’s long-term compensation for the pawn has gone one notch higher. Moreover, White can achieve e4 in this line so the question is whether Black has a way to react immediately. I didn’t fancy Black’s prospects facing White’s 2 bishops with his 2 knights and a wall of pawns on e4 and f3. For example, I was seriously worried about a line like 26.e4 Rae8 27.h4 Nf7 28.Rf2. The engines still consider Black to have a definite advantage but I disagree. Any attempts for Black to break out could easily go badly wrong. The key point as far as I was concerned was whether 26…f5 was a strong response to 26.e4

was the main line of my calculations. When I saw that 29…Re1 wasn’t winning on the spot, I had an emotional counter-reaction and decided that the whole line wasn’t good enough. Essentially, I felt that with 26…f5, I was taking an extreme measure to justify giving White 2 bishops versus 2 knights with …Bh3xg2. That measure felt illogical when you consider that I had played …f7–f6 a few moves earlier (move 19 in fact) to explicitly counter White’s threats on a1–h8 diagonal.

I preferred to go for something that felt much more logical: while White was spending vast amount of time preparing f2–f3, I would free myself of my backward d-pawn and solidify my central control by supporting my knight on e4 with a pawn. A pawn on d5 would also prevent White from expanding with e3–e4. 100% logical, but as I realised with mounting concern, the tactics were not wholly in my favour. Back to my move in the game: 22…Be6

The plan I had envisaged. My knights on c5 and e4 are loose however so the situation remains fraught for a few more moves. And around here, another problem popped up in my head.

So that my knight is protected after f3 …Nd6 or …Ng5, cxd5. However, rather surprisingly my rook is going to be vulnerable on this square.

A moment of great relief. After this move, Black’s plan makes perfect sense. By now I’d realised that I had a tactical problem after 25.Nf4.

White’s best idea. It took me some moments to believe that White’s position was hanging together tactically. That disbelief was influenced by a few subjective factors: White has played Qc2–b2–c2, Rf1–d1–f1 and Nf3–e5–f3–h4–g2–f4. How could the tactics possibly work for him after wasting so much time? Another hard lesson in the unfairness of life!

i) 26.cxd5 g5 I realised I needed this move, and that gave me the feeling I’d lost control somewhat. The position is extremely complicated. (26…cxd5 27.Nxd5 was my first shock: there is no good discovery for the knight on c5.)

is not too successful

After such a weakness as …g5, White will always have full compensation for his pawn. Objectively the position is balanced, but comparing this position to the position after move 10, White has made a better job of generating play for his pawn than I have of consolidating my advantage! Note that 29…bxc5 30.Rxd5 Bxd5 31.Qxd5+ Kf8 32.f3 is very unpleasant for Black.

is an edge for Black

This was the resource that especially worried me during the game (either here or on move 26). White attempts to disrupt the balanced defensive structure that Black has set up with his last 4 moves.

During the game, I couldn’t decide how to assess this position. It seems to be fine but not better.

I’ve spent a lot of time analysing this line. I was worried about Black’s king, but he seems to have plenty of resources

was the main line I looked at, with the dual threat of activating the queen on g4 and invading on d8 with the rook. It also anticipates Black’s main (and very dangerous) attacking idea.

This is it! But White is ready!

is a draw. A line I analysed in the train and the engines didn’t find any better – pretty pleased about that!

One move and everything has changed: Black’s position makes perfect sense again. His pawn on d5 holds back White’s advance e3–e4 and his knight on d6 is ready to jump to c4 or f5 and put pressure on e3. On top of that, the tactics are going Black’s way again.

27.Nf4 Bf7 28.Nxd5 no longer works due to 28…Ne6 The knight on d6 protects the rook on c8 which means White no longer has the tactic Ne7+. I managed to finish off the game safely, helped by White’s severe time trouble.

The last difficult moment: this move eliminates any last measure of looseness in Black’s position and prepares the transfer of the knight to d3 via c5.