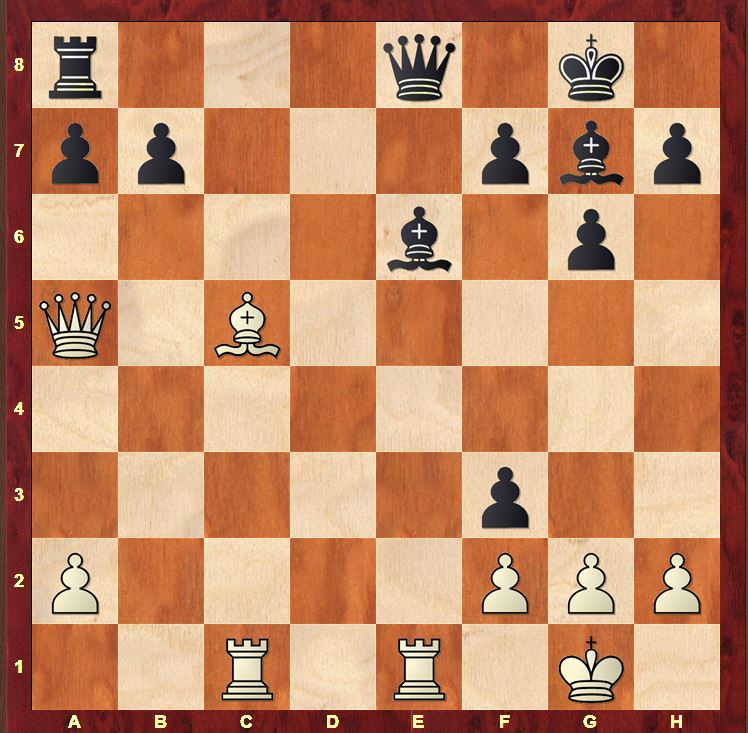 At the close of the first week’s play, Yates led with a score of 6 points followed by Atkins with 4,5 points, and the meeting of these 2 experts was watched with the greatest interest. Their game was twice adjourned, Atkins winning on the 84th move after 8 hours and 20 minutes’ play.

Atkins was unable to capitalise on this result, losing to the Scottish Champion McKee in the 9th round, some over-aggressive play culminating in a gruesome knight fork. With 2 rounds to go, Yates was leading with 8/9 to Atkins’ 6,5/9. The Belfast Newsletter of August 24th declared that victory for Yates “now seems assured”! However, while Atkins won both his last games, Yates could only muster half a point. The same Belfast Newsletter stated that in Yates’ 11th game against McKee “his chance of escaping defeat seemed at one time a precarious one” (if the score is to be believed, Yates blundered and allowed mate in 3 which McKee did not spot).

Atkins built up a good record against Yates over the years –  Megabase 2017 gives him +5 over 11 games – and this match certainly contributed, Atkins winning 3-0 (the 4th game was not played). I liked this game for several reasons.

Secondly, it’s a good example of Atkins’ willingness and ability to take on and play typical structures.The games in this article are available again in playable form at http://cloudserver.chessbase.com/MTIyMTYx/replay.html

Yates has headed with little subtlety for the defensive side of a Hanging Pawn structure. A less obvious approach might have yielded an extra tempo or two. For example, instead of capturing on d2 immediately, he might have waited until White forced him to do so (for example via Qc2). After …Nxd2, Qxd2 White’s queen has ended up on d2 in 2 moves instead of just one. It’s the same point as the one I made in the earlier article http://matthewsadler.me.uk/the-middlegame/hanging-out-with-efim/

As a general rule, unless you have a concrete goal in mind, you should maintain tension for as long as possible. If an exchange is not yet forced, then it is normally correct to delay it. Such tension exerts a restraining effect on the opponent’s plans and possibilities; once the tension is resolved, you often notice that the opponent is closer to implementing his plans.

I’m also not impressed with the move 14…Nf6. Left unchallenged, White’s pawns on c4 and d4 are a formidable barrier to Black’s pieces: neither of his rooks can make any impact on the half-open c- and d-files while White is able to transfer his rook(s) to the kingside along the 3rd rank behind the cover of his hanging pawns. Black has to hit the pawns as quickly and as hard as possible, and the pawn on c4 is normally the easiest to start with:

Desperately trying to disrupt White’s structure before he gets settled

…when Black’s pressure against c4 forces White to take action

is better for White but Black has at least removed White’s possibility of an easy, measured build-up as in the game.

The less desperate option 16…Qc7 (instead of 16…Bb4) is well worth seeing too!

The typical double-bishop sacrifice, here with a couple of unusual tactical twists

I wasn’t sure how wonderful this would be for White (although easy to play in a practical game as White always has the draw in hand). Komodo thinks a clear edge (+1.43) mainly due to the invulnerability of the c-pawn (which I hadn’t spotted)

It really is too easy for White! 19.Qf2 threatening Qh4 was also very strong

21.d5 was also very powerful. The text is more complicated but very strong too.

26.d5 building up the pressure was even stronger

A cautionary tale for players on the Black side of the Hanging Pawns structure. Don’t hesitate! Start attacking those pawns as quickly as possible!

The last phase of Atkins’ career started in 1935 when he played for the English team in the 1935 Warsaw Olympiad, together with William Winter, Sir George Thomas, C.H.O.D. Alexander and Harry Golombek. Atkins’ return (39 years after he’d first played for England) was greeted in the Yorkshire Post of August 13th 1935 with the headline “Great Yorkshire Player’s Return”. The author Gerald Abrahams commented that “his play will be watched with interest because he was celebrated on the theoretic side of the game before chess theory was widely known to amateurs” which doesn’t sound like a glowing endorsement! The tournament was not a great success for Atkins. He started excellently with 4,5/6 but lost 4 games in succession and a finish of 3 draws brought him to 6/13. First reserve Golombek (also described by Abrahams in the article as “a theoretician of ability”) was the most successful British player with a score of 7,5/14. Mention should also be made of Winter’s very creditable 7,5/18(!) on Board 1 (including a draw with Alekhine).

The last game in this article was played by Atkins in the May 1937 Holland-England match in Amsterdam, less than a year after he’d retired from his post as Huddersfield College Headmaster (the Yorkshire Post of 8th October 1936 dedicated a short article detailing his achievements). The Dutch team was reasonably strong boasting Euwe and Landau on the top 2 boards. England edged the first round 5,5-4,5, but faded 6-4 in the second round to lose the overall match 10,5-9,5. The game against Prins is an interesting echo of Atkins’ game against Rubinstein in which he re-organises his game around his queen after an initial tactical exchange.

Atkins has chosen a typically common-sense and natural method of development against the Grunfeld: protect d4 and c3 and get the queen’s rook off the a1 diagonal as quickly as possible in order to achieve d5. Prins now starts up a very fraught tactical operation!

A little too much! 15.Bb4 b6 16.d6 is very powerful for White: d7 is a threat and the knight on a5 is completely offside

Not the most accurate. 18…b6 was much better. Compared to the game, 19.Qb4 is impossible due to 19…bxc5 so either White’s queen has to retreat to a more passive square, or White has to give Black 2 unchallenged bishops with 19.Bxb6 axb6 20.Qg5 Be6 which is bound to be fine for Black. We’re now coming up to an interesting moment

After a tactical flurry, the dust has settled down a bit. At first sight, Black is doing excellently: 2 bishops, the threat of …b6 winning a piece, and …fxg2 opening up White’s kingside structure while Black’s king remains safe. It’s quite astounding that White should be able to finish off the game with a mating attack within 6 moves! I really like the manner in which Atkins sweeps his pieces from the queenside to the kingside, once again – just as in the Rubinstein game – underpinned by the coordination of a queen and bishop (the queen and light-squared bishop in that game, the queen and dark-squared bishop in this game)

Just a one-move attack against the b7 pawn at first sight, but there is a much deeper idea.

Excellent strategy: the best way to neutralise a pair of bishops is to exchange one. In this case, once Black’s dark-squared bishop is exchanged, Black’s own kingside dark-squares start to look sensitive too (White will do his best to get his queen to f6 after the exchange of bishops) so Black’s it’s understandable that Black wants to avoid the exchange.

The engines start off reasonably positive about this move, but the more of Atkins’ moves they see, the less happy they are. Watch how Atkins swivels the White queen around the bishop on d4 to bring it into attacking play.

A great square for the queen, eyeing both f6 and the rook on a8 (which restricts the movement of the Black queen on e8). White also has the insidious threat of Bb2/a1 followed by Qc3 finding another path to the a1–h8 diagonal. Black is seriously stretched as he will find it hard to cover 2 squares as far apart as c3 and f6.

Trying to repair his mistake on move 21 fails to

covers f6, but just gives White an easy way to increase his advantage

A very good move. First I thought that 24.Red1 might be stronger, then I thought I’d refuted it with a computer-like defence… but then the engines showed I’m not a machine! Both seem to be strong!

This was my miracle defence. The idea is to get the bishop away from e6 to a safe spot on the a2–g8 diagonal so that Black can meet Qe5 with …f6. Unfortunately, a2 is not a protected outpost!

26.Rd2 Bringing the bishop back into open play!

Ouch! Forks the rook on a8 and the bishop on b3!

A nice finish, deflecting the queen

demonstrates exquisitely the power of the bishop and queen combination that Atkins brought to life starting on move 20!

Just a little postscript. I was analysing these games as training for my 4NCL games a few weekends ago. In a fraught and complicated encounter with the Spanish IM Alberto Real Suarez, I suddenly thought of Atkins!

From an unpromising early middlegame, I’d tricked Black into sacrificing his queen. Assessing the position from afar, I said to myself with a wry internal smile that I might be forcing Black to sacrifice his queen brilliantly! At this point I needed to make a fundamental choice: either I defended g2 with the queen via 28.Qf3 and then tried to generate counterplay with my kingside pawns (f4–f5) or I defended g2 with the rook (28.Rg1) and left my queen free. I think you can imagine what I wanted to do after having studied Atkins’ games! I found a very nice sequence of moves to neutralise Black’s play and coordinate my own.

Bh6 is an annoying threat, so Black tries to displace the queen from the a3–f8 diagonal

I was dithering a little between 30.Qe7 and 30.Qe5, but I felt I could coordinate my queen, bishop and rook much better with a centralised queen

There we are! Queen and bishop acting together to create mating threats and both back rank and second-rank threats neutralised. Thank you Henry Ernest! I won on move 53.

One last intriguing thing: Coles mentions that “I have been fortunate in having placed at my disposal all his old chess notebooks”. I wonder where these have ended up. It would be fantastic to put together a complete collection of Atkins’ games including all the club games he played throughout his career.